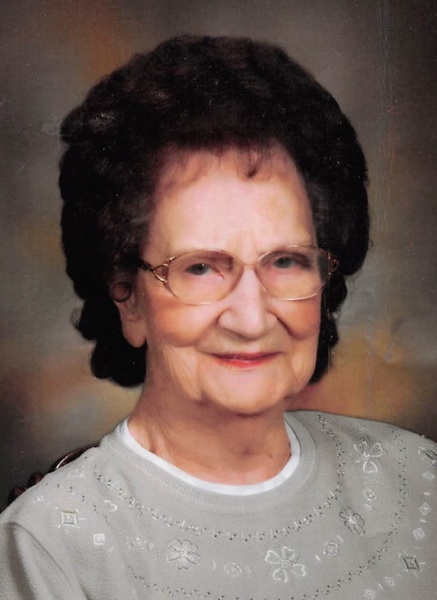 Leona Hanson, 100, of Breckenridge, MN, passed away on Wednesday, July 19, 2017, at St. Francis Nursing Home in Breckenridge under the care of CHI Hospice Health at Home. The visitation will be from 5:00 to 7:00 PM, with a prayer service at 7:00, on Monday, July 31, at Joseph Vertin and Sons Funeral Home in Breckenridge. The visitation will continue at Breckenridge Lutheran Church, from 9:30 to 10:15 AM, on Tuesday, August 1, followed by the funeral at 10:30 AM. Pastor Mark Manning will be officiating. The interment will be at Riverside Cemetery in Breckenridge.
Leona Klein was born on August 29, 1916, at her family’s home in Nelson Township, Wilkin County Minnesota, one of twelve children born to Henry and Marie (Montz) Klein. Leona attended rural country school. On June 28, 1938, she was united in marriage to George Stach in Breckenridge. The couple made their home on a farm north of town and was blessed with four children. Tragically, a farm accident claimed George’s life on May 12, 1956. A short time later, Leona moved to Breckenridge and worked as a bailiff and an assistant custodian for Wilkin County. On October 16, 1970, Leona married Hector A. Hanson at Breckenridge Lutheran Church. She and Hector loved to fish and enjoyed ‘treasure hunting’ at garage sales. Hector preceded her in death on July 5, 2000.
Leona was an animal lover and was especially fond of her cats. She loved to dance, was a marvelous cook, and delighted in listening to the music of Elvis Presley. Leona simply loved people. She was a lifetime member of the Ladies Auxiliary VFW 2766 in Wahpeton and a member of Breckenridge Lutheran Church. She had spent the last few years at CHI St. Francis Nursing Home where she has been under the loving care of a dedicated staff and the comfort of her stuffed animals.
Leona is survived by her children, Kenneth (Marge) Stach of Cambridge, WI, Victor (Joyce) Stach of Vergas, MN, Linda (Kevin) Melkert of Breckenridge, MN; seven grandchildren and eleven great-grandchildren; her sisters, Rose Wolters of Breckenridge and Molly Byland of Moorhead, MN; her sisters-in-laws, Anne Klein, Mary Ann Mohs, and Maxine Hanson. She is preceded in death by her husbands, George Stach and Hector Hanson; her son, Tom Stach; her sister Pauline Matheson; her brothers, John, Ronald, Daniel, Reuben, Henry Jr., Adolph, Rudolph, and Frederick Klein; and two granddaughters, Gina Stach and Amanda Engst. Leona's Memorial Folder
To order memorial trees or send flowers to the family in memory of Leona Hanson, please visit our flower store.