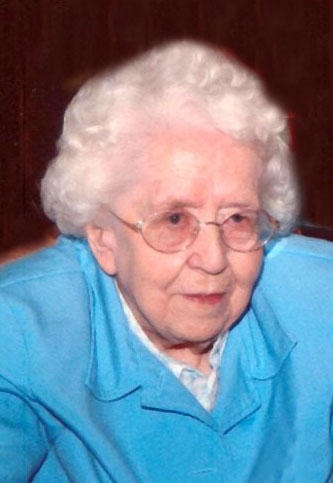 The visitation for Leona Mikkelson is on Sunday, March 4, 2012 from 5 to 7 pm at Joseph Vertin & Sons Funeral Home. The funeral is Monday, March 5, 2012 at Zion Lutheran Church of Amor, Rural Battle Lake, at 11 am. Officiating is Pastor James Gronbeck. The interment is at Fairview Memorial Gardens in Wahpeton, ND.
Leona Katherine (Thompson) Mikkelson, died on February 17, 2012 at the Golden Living Center on Ottertail Lake. She was 99 years old. Leona lost her sight to macular degeneration, but she never lost her sense of humor or her loving manner. She taught her family love, patience and how to live and die with grace.
Leona was born on December 31, 1912 in Elbow Lake, MN, the daughter of Guy and Gena (Haugen) Thompson. She married Clarence Mikkelson April 15, 1932 in Breckenridge and raised five children. She worked as a cook at Breckenridge High School from September 1957 to May 1978. Upon her and Clarence's retirement, they moved to Ottertail Lake. They enjoyed living on the lake until health concerns caused them to move to senior living in Fergus Falls, MN. In 2000 they both moved into the Golden Living Center on Ottertail Lake. Clarence died on December 22, 2003. Leona's family wishes to extend their sincere thanks to the staff at Golden Living Center on Ottertail Lake who took such good and loving care of Leona from the many years she lived there.
Leona is survived by her five children, Dick (Betty) Mikkelson of Fairbault, MN, Larry (Carol) Mikkelson of Battle Lake, MN; Di Ann (Steve)Muellenbach of Milbank, SD, Gail Mehl of Fergus Falls, MN and Hugh (Julie) Mikkelson of Breckenridge, MN. Leona is also survived by 17 grandchildren, 26 great-grandchildren, and her brother Everett of Minneapolis, MN.
Leona is preceded in death by her parents Guy and Gena Thompson, her husband Clarence Mikkelson, her son Gary Mikkelson, and her brothers Merrill, Vernon (Nemo), Howard, and Orlando (Boy) Thompson.
To order memorial trees or send flowers to the family in memory of Leona Mikkelson, please visit our flower store.