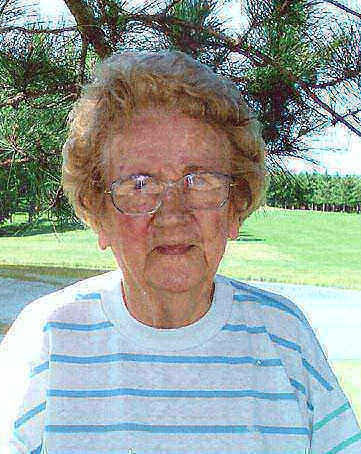 Leona (Johnson) Stave, 94 of Breckenridge, MN and formerly of Benson, MN died on Friday, March 16, 2012 at St. Francis Nursing Home in Breckenridge. The visitation and funeral are Saturday, March 24, 2012 at Breckenridge Lutheran Church. The visitation is one hour prior to the funeral beginning at 10:00 am. The funeral is at 11:00 am. Pastor Mark Manning is officiating. The interment is at 3:00 pm. March 24 at the Benson City Cemetery in Benson, MN.

Leona was born September 30, 1917 to Gunhild and Lewis Rice in Kerhoven Township where she attended grade school at the Carlson Public School, District No. 66. In May of 1936 she graduated from Benson High School. She was baptized and confirmed in the Lutheran faith at Spring Creek Church by Reverend H.E. Baalson. On May 29, 1938, Leona was united in marriage to Leonard W. Johnson of Benson at the Little Brown Church in Nashaw, Iowa. To this union two children, Colleen and James, were born.

Shortly after the wedding, Leonard was called from the Benson National Guard to serve the US Army during WWII. They were separated from 1941-1945 during his service in the European Theatre. After his discharge, Leonard returned to Benson where he and Leona were finally able to begin their married life together. She was a devoted wife and mother and was a strong support to Leonard as owner of the Johnson Body Shop. Later, she became employed as a dining room aid at the Benson Southside School. She was an active member of Redeemer Lutheran Church where she taught Sunday School for many years. She loved cooking and gardening and made everything around her beautiful.

On September 18, 1989 Leonard passed away. Leona sold her home and moved to Breckenridge to be close to her son and his family. On July 24, 1998 she married Shervin Stave of Wahpeton, ND. There was a devastating flood which prompted them to move to Morris. She and Shervin enjoyed many years of dancing, playing cards, and spending time with family. They later returned to Breckenridge, where she resided until her death.

Leona is preceded in death by her parents, her husband Leonard, ten of her eleven siblings and Stacey's husband, Gene Stueven. Cards and memorials may be sent to Joseph Vertin & Sons Funeral Home, 303 North 5 Street, Breckenridge, MN 56520.
To order memorial trees or send flowers to the family in memory of Leona Stave, please visit our flower store.