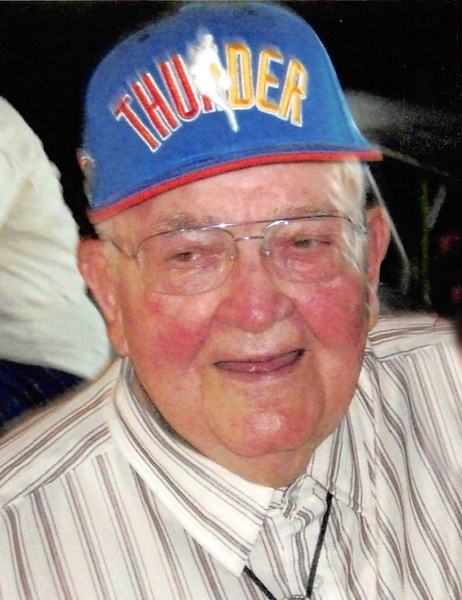 Lesley Robert Aldrich, 95, of Fargo, ND formerly of Breckenridge, MN, passed away on Monday, June 27, 2016, at the Villa Maria in Fargo. The visitation will be from 5:30 PM to 8:00 PM, with a prayer service at 7:00 PM, on Thursday, June 30, at Joseph Vertin and Sons Funeral Home in Breckenridge. The visitation will continue from 10:00 to 10:45 AM on Friday July 1, at the First Baptist Church in Breckenridge, followed by the Celebration of Life service at 11:00 AM. The interment will be at Fort Snelling National Cemetery in St. Paul, MN, at a later date.
Lesley was born in Breckenridge, MN, on July 17, 1920, one of eleven children born to Guy and Emma (Wolters) Aldrich. He graduated from Breckenridge High School in 1938 then entered the US Army National Guard. He served his country for eight years and during that time, he was deployed overseas to fight in World War II. His first mission was at Guadalcanal in 1942 where the 164th Infantry was sent to help defend the Henderson Air Base. After successfully completing this mission, Lesley volunteered for the Merrill Marauders and was sent on four more assignments, including India, China, Burma, and Lordsburg, New Mexico, before his honorable discharge in 1945.
He met the love of his life while stationed in New Mexico as a Staff Sergeant guarding the German Officer POWs. Lesley and Estella Altuna were married on February 24, 1945, in Deming, New Mexico. Following his discharge, the couple returned to Lesley's home town of Breckenridge and within ten days, he was hired on the Burlington Northern Railroad. While employed with the railroad, Lesley was president of the Brotherhood of Locomotive, Fireman and Engineers Union. He retired from the railroad in 1981. He and Stella loved to travel and enjoyed spending their winters in Florida and New Mexico. Lesley found many ways to relax including, whittling, fishing the Minnesota and Canadian lakes, and gardening. He loved playing Pinochle with his family and friends and his usual quip was, "All I ever get are Jacks and Nines!" He looked forward to visiting and reconnecting with his family especially with his grandchildren.
Lesley will be missed by his four sons, Leslie (Julia) Aldrich of Courtland, MN, Thomas (Lois) Aldrich of Fargo, ND, Rodney (Terri) Aldrich of Minot, ND, and Gregory Aldrich of Breckenridge; his eight grandchildren, Natasha (Derek) Goblirsch, Ryan Aldrich, Cora (Brennen) Kratky, Krista Aldrich, Esther Aldrich, Nathaniel Aldrich, Alex Aldrich, and Jon Aldrich; his five great-grandchildren, Arya and Asher Goblirsch, Chloe, Camilla, and Calia Kratky; his sisters, Arlene Richter, Joyce Anderson, and Eunice (Harold) Bickel; and many nieces and nephews. Lesley was preceded in death by his parents, Guy and Emma; his wife, Estella; his son, Guy; his sisters, Lillian Parker, Juanita Cuff; and his brothers, Louis, Walter, Donald, Lloyd, and Floyd.
To order memorial trees or send flowers to the family in memory of Lesley Aldrich, please visit our flower store.