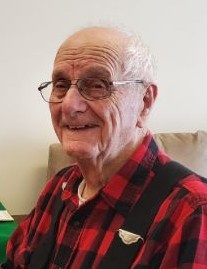 Leslie Vincent Bruce, 102, of Breckenridge, MN, passed away at his home on Tuesday, June 2, 2020. A public visitation will be held from noon to 2 p.m., Saturday, June 6, 2020, at United Methodist Church, Breckenridge, followed by a private family service. Pastor Mark Gronseth will be officiating. Burial will be held at Riverside Cemetery, Breckenridge.

Born December 19, 1917, to Charles W Bruce and Effie (Sharp) Bruce, the youngest of five children in Marengo, Iowa.  When Les was five years old, he moved with his parents and two youngest siblings to Sandy, Oregon where they lived until 1930.  Les, his sister Blanche and his parents relocated to Meadows Township, Minnesota and Les lived on the family farm from 1930 until he moved to Breckenridge in 2016.

Les married Laurel Buus on October 14, 1952, and raised three children, Julie, Paul, and John on the family farm. Les built the house the family lived in and farmed, milked cows and raised beef cattle, hogs and chickens until 1978 when he sold his farm equipment and rented out the farmland. He worked at Minn-Dak for ten years.  Les also worked with other family farmers for years after that.

Leslie was preceded in death by his parents, his siblings, his wife Laurel, his son John Bruce, as well as an infant daughter.  He is succeeded by his daughter Julie (Tom) Lay, his son Paul (Beth) Bruce, daughter-in-law Mona (Don) Taylor, 13 grandchildren, and 26 great-grandchildren.

Les was a friend and a helper to everyone he met.  He greeted everyone with a smile.  Les loved to fish, play cards, fish, work jigsaw puzzles, and fish.  He loved his garden at the farm and shared what he grew with friends and neighbors.  Les loved meeting his friends for coffee and stories and appreciated the warm welcome he got when he moved to Breckenridge and lived near several new friends who took great care of each other.  Leslie died at age 102 and will be greatly missed.

To order memorial trees or send flowers to the family in memory of Leslie Bruce, please visit our flower store.
Open