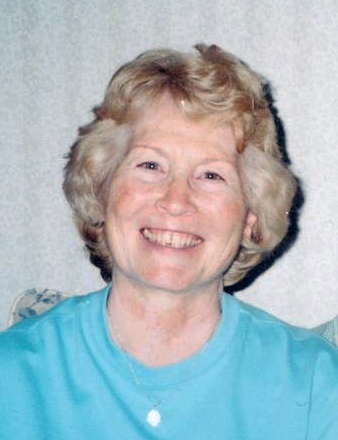 Lois M. Abel, 83, of Breckenridge, MN, passed away peacefully on March 15, 2016, at Essentia Hospital in Fargo, ND, surrounded by her loving family. Visitation will be from 5:00 to 8:00 PM, with a Christian Mother's Rosary at 5:30 and a prayer service at 7:00 PM, on Sunday, March 20, at Joseph Vertin and Sons Funeral Home in Breckenridge. Visitation will continue from 9:00 to 10:15 AM, at the funeral home on Monday, March 21, followed by the 10:30AM Mass of Christian Burial at St. Mary's Catholic Church. Celebrating the Mass will be Father Joseph Backowski. The interment will be at St. Mary's Catholic Cemetery in Breckenridge.
Lois was born in Lidgerwood, North Dakota, on December 26, 1932, one of seven children born to Frederick and Amalia (Marohl) Ellis. On June 10, 1953, Lois was united in marriage to the love of her life, Francis H. Abel. They were devoted to each other for 62 years. Together, they were committed to the nurturing and rearing of their six children; and along with the blessing of her grandchildren and great-grandchildren, her life was full and content.
Lois had a deep love for her Lord and placed a high value on serving Him and ministering in the Catholic Church. She spent many years serving as an Extra-ordinary Eucharist Minister. As a Christian Mother member, she had the privilege of placing a rose next to the tabernacle and at the Rosary Cenacle. Lois loved to read and was an avid gardener as was evidenced in her beautifully groomed flower beds, especially her roses. Lois was an accomplished needle crafter and enjoyed making many gifts for her family.
Lois is survived by her husband, Francis; her children, Pamela Johnson of Breckenridge, Thomas (Mary) Abel of Hudson, WI, Mike (Cindi) Abel, Robin Abel, Daniel J. Abel, Sr., all of Breckenridge, and Sue (Kellan) Pauly, of Wahpeton, ND; her 16 grandchildren, Nikki (Darren), Jami (Eric), Tyann (John), Tyler (Kelly), Tyson (special friend, Anna), Krista (Kody), Ryan, Stacie (Daniel), Rebekka (fiancé, Mason), Lauren (special friend, Jason) Daniel Peppin, Jessica (Erik), Daniel Jr. (Augusta), Aaron (fiance, Brooke), Bobby, Alli (special friend, Carter); her 19, plus one on the way, great-grandchildren; her two brothers, Gene (Judy) Ellis and Russ (Mary) Kuzel; and her four sisters, Pearl Parrish, Gwen Bolster, Faye (Richard)Wiese, Ann (Kenneth) Medenwald, sister-in-law, Sheryl Ellis. Lois was preceded in death by her mother and step-father, Molly and Art Kuzel; an infant granddaughter, Teaya; son-in-law, Roger Johnson; a brother, Glenn Ellis; sisters-in-law, Florence Platt and Louise Abel; and three brothers-in-law, Billy Parrish, Vince Platt and Robert Abel.
To order memorial trees or send flowers to the family in memory of Lois Abel, please visit our flower store.