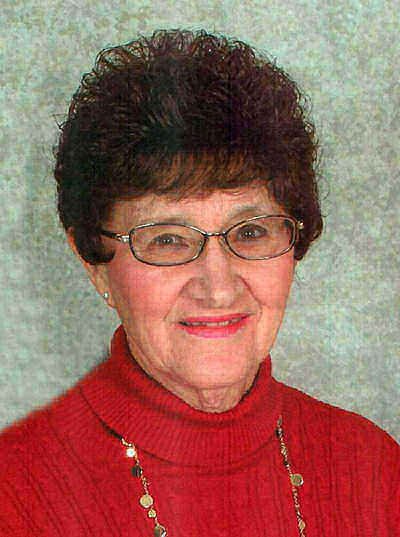 Lois Eileen Wiertzema, 78 of Breckenridge, MN passed away Saturday, April 14 at St. Francis Nursing Home in Breckenridge surrounded by her family. The visitation is at Joseph Vertin & Sons Funeral Home, Thursday, April 19 from 4:00pm to 7:00pm with prayer service at 7. The funeral is 10:00am Friday, April 20, at Valley Christian Church, Breckenridge. Pastor Dean Bjorlin is officiating. The interment is at Riverside Cemetery in Breckenridge.

Lois was born in Breckenridge, MN on February 17, 1934 to Charles and Mildred (Schutte) Green. She went to school in Breckenridge, graduating from High School in 1952. On June 3, 1955 Lois was united in marriage to Larry Wiertzema. They lived on a farm south of Breckenridge where they raised their four children. Lois worked side by side with Larry on the farm. She was a devoted mother inspiring faith, strong work ethic and depth of character.
After the children were grown, Lois sought work outside the home. She was seasonally employed at Four Seasons Green House. She also worked as a receptionist for Harris Bailey, and later as a teacher's aide at Breckenridge Elementary School. She and Larry retired in 1995 and moved into Breckenridge in 1997.
Music was an important part of Lois' life. She played the piano, organ and keyboard at church. Her faith in God was the motivation for the way she lived her life. She was a prayer warrior and counted it a privilege to go before her Lord on behalf of those she loved. She was committed to teaching Sunday school, playing music at church and volunteering for meals on wheels. Lois was an avid flower and vegetable gardener. She was a fabulous cook and took great pleasure in entertaining family and friends and spending time with them.
Lois is survived by her husband of 56 years, Larry, Sr.; her children Larry, Jr. (Julie) Wiertzema of Breckenridge, MN and their children Melinda (Keo) Sengsavang of Eagan, MN, Luke (Maggie) Wiertzema of Campbell, MN, Anna (Ben) Gurney of Wahpeton, ND and Adam Wiertzema of Breckenridge, MN; Julie (Paul) Blankenship of EggHarbor Township, NJ and their children Jordan and Ben; Connie (Lowell) Seidler of Rothsay, MN and their child Jenna; and Daniel (Kimberly) Wiertzema of Breckenridge, MN and their children Bryce, Jayden, Ryler and Kiera; 3 great-grandchildren, Josiah, Reagan and Logan; her siblings Elaine (John)Schatz of Wahpeton, ND; Marlene (Dale ) Arndt of Breckenridge, MN; Edna (August) Regeness of Henry, WI; Betty (Walter) Linson of Anoka, MN; Linda (Robert) Carlson of Eden Prairie, MN; Delpha (Larry) Schram of Chanhassen, MN; Lyle (Kay) Green of Breckenridge, MN; Charlie, Jr. (JeAnne) Green of Breckenridge, MN and sister-in-law Dorine Green of Breckenridge, MN.
Lois is preceded in death by her parents Charles and Mildred; three brothers Charles, Jr. II, Dennis, and David; and a grandson Jace Wiertzema. In lieu of flowers memorials preferred to a church mission.
To order memorial trees or send flowers to the family in memory of Lois Wiertzema, please visit our flower store.