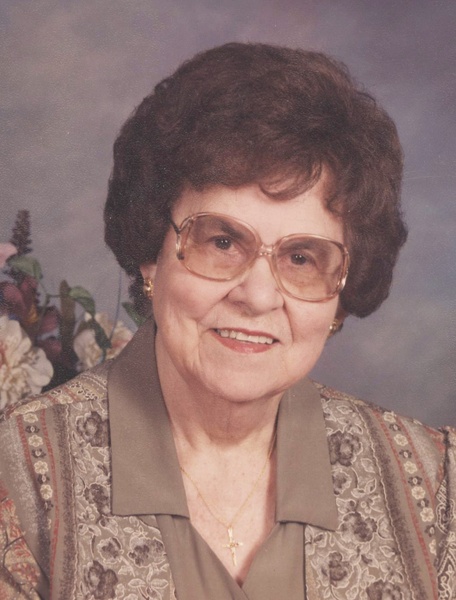 Louise Ann Abel, 92, of Breckenridge, MN, passed away on July 5, 2015, at CHI St. Francis Hospital in Breckenridge. The visitation will be from 5:00 to 8:00 PM with a Christian Mother's Rosary at 5:30 and prayer service at 7:00, on Tuesday, July 7, at Joseph Vertin & Sons Funeral Home in Breckenridge. The visitation will continue on Wednesday, July 8, from 9:30 to 10:30 AM at the funeral home, followed by the 10:30AM Mass of Christian Burial at St. Mary's Catholic Church in Breckenridge. Father Joseph Backowski will be the celebrant. The interment will be at St. Mary's Catholic Church.
Louise Pechlat was born on September 26, 1922, near Abercrombie, ND, one of 5 daughters born to John and Laura (Buth) Pechlat. She was raised on a farm near Abercrombie and attended country school near her home. Following her schooling, she worked at Hart's Café in downtown Breckenridge. She was united in marriage to Robert Abel on November 16, 1944, at St. Joseph's Catholic Church in Brushvale, MN. The couple made their home in Breckenridge. In those first years of marriage, Louise was employed at St. Francis Hospital in Breckenridge as a dietary aide. In 1962, Louise and her family moved onto the farmstead in rural Breckenridge. They bought a cabin on Ottertail Lake in 1976 where many happy memories with family and friends originated. Robert passed away on September 21, 1993, and shortly after Louise moved into Breckenridge. She moved into St. Francis Nursing Home in 2010, where she received competent care and the benefit of fellowship.
Louise utilized her love of baking and became a skilled cake designer. She was gratified to have made all four of her sons' wedding cakes and many of her grandchildren's as well. In addition, her home welcomed many friends and family with the aromas of home-made treats and delicious meals. She enjoyed the bonds of friendship with her bowling league buddies and looked forward to many traveling adventures with them. Louise loved to quilt and crochet, putz in her flower garden, play cards, and watch the MN Twins. She was an active member of the Ladies Auxiliary, St. Mary's Catholic Church, and Christian Mothers. She also volunteered her time at the Eagle's Club. For all of the many loving and kind things Louise did throughout her life, none was more fulfilling than that of being a wife, mother, and grandmother. Her family was her joy and delight.
Louise is survived by her four sons, Ron (Julie) Abel of Shevlin, MN; Rick (Colleen) Abel of Moorhead, MN, Roger (Eloise) Abel of Breckenridge, and Gary (Sue) Abel of Wahpeton, ND; 13 grandchildren, 31 great-grandchildren and 3 great-great grandchildren; her sisters, Lucy Duke of Jackson, TN and Angeline Miller of Breckenridge; a brother-in-law, Francis (Lois) Abel of Breckenridge; many nieces and nephews. She is preceded in death by her parents, John and Laura; her husband, Robert; an infant son; and her sisters, Cecelia Johnson and Flo Weiss; her sister-in-law, Florence Platt, brothers-in-law, Neil Johnson, Frank Duke, and Jim Miller.
To order memorial trees or send flowers to the family in memory of Louise Abel, please visit our flower store.