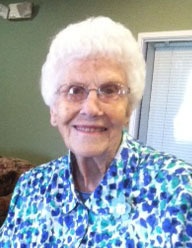 Louise "Weezie" Madeline Knudson, 98, of Breckenridge, MN passed away on Sunday, October 18, 2015 at CHI St. Francis Hospital in Breckenridge. The visitation will be at Breckenridge Lutheran Church, from 9:00 to 10:15 AM, on Wednesday, October 21, followed by the funeral service at 10:30AM. Pastor Mark Manning will be officiating.
Louise was born on July 6, 1917, on a farm near Foxhome, MN, to William and Hallie (Turner) Link. She attended country school and helped on the farm until she turned 18. At that time, she moved to Fergus Falls and began working in child care and at Norby's Department Store. She then returned to Foxhome and became a nanny for some of the neighboring families. On September 15, 1943, Louise was united in marriage to Henry Charles Knudson at Breckenridge Lutheran Church. The couple made their home and raised their three children in Breckenridge.
Louise was very active in the Breckenridge Lutheran Church. As a member of the Abigail Circle and WELCA she made quilts and helped out with various hospitality functions. She also served on the church council, was the overseer of the church nursery and children's choir for thirteen years, and belonged to the church's book club. Louise loved to polka dance and looked forward to the Polka Worship Service at her church. She was an active member of the Railroad Retirees Association and the Breckenridge Senior Citizens Center. She was an avid reader and an exercise enthusiast, and enjoyed crafting in her spare time.
Louise is survived by her daughter, Gayle (Leonard)Lacey of Lakewood, CA; her two sons, Steven (Lynn) Knudson of La Porte, IN, and Ronald (Karen) Knudson of Brooklyn Park, MN; seven grandchildren; 15 great-grandchildren and seven great-great grandchildren; numerous nieces and nephews, great, and great-great-nieces and nephews; a brother, Kenneth (Verna) Link. She is preceded in death by her parents, William and Hallie Link; her husband, Henry; twin daughters, Nellie Helen and Hallie Louise; a son, Martin Link; grandson, Lawrence Knudson; her sister, Winifred Hauer; and two brothers, Ersal and Ernest Link.
In lieu of flowers, the family wishes to have memorials donated to Breckenridge Lutheran Church at 301 6th Street, Breckenridge, MN 56520, or a charity of their choice. Louise has been entrusted to Joseph Vertin and Sons Funeral Home in Breckenridge.
To order memorial trees or send flowers to the family in memory of Louise Knudson, please visit our flower store.