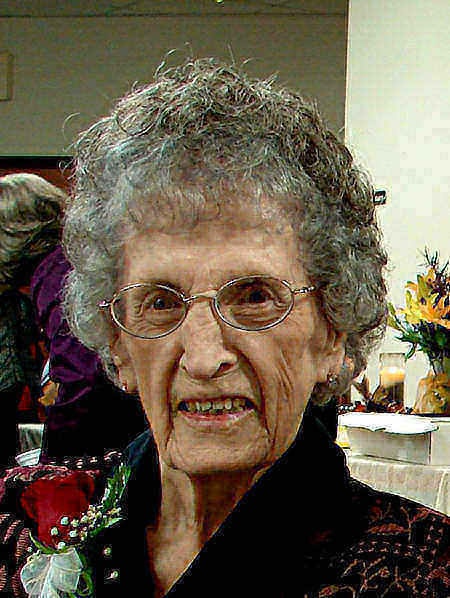 Luella Jensen, 91 of Breckenridge, MN passed away on March 14, 2011 at St. Francis Health Care Campus. The visitation is Thursday, March 17 from 4 pm to 7 pm with a prayer service at 7 at United Methodist Church in Breckenridge, MN. The funeral is Friday, March 18 at 2 pm also at the United Methodist Church with Pastor Gary Gottfried officiating. The interment is at Riverside Cemetery Breckenridge, MN.
Luella was born on December 18, 1919 on the family farm in rural Hawley, MN to Arthur and Kate (Plummer) Lewis. She grew up and attended school in Hawley, graduating in 1938. After graduation, Luella went to Moorhead State Teachers College in Moorhead, Minnesota and completed her education in 1942. She received a teaching position in Roseau, MN and taught there until marrying her college sweetheart, Ken Jensen in 1944. They were married on June 26 at the Hawley Methodist Church in a double ceremony with Luella's twin sister. They made their home in Breckenridge where they established a life long attitude of serving their community. Luella was the church secretary at the United Methodist Church for 45 years and Ken taught in the Breckenridge School System. Luella was active in the United Methodist Church as a Sunday School Teacher, choir member, and served in the Mirium Mission Circle. She was actively involved in United Methodist Women and was named the NW District Outstanding Woman of the Year in 2010. Luella also participated in PEO, Musical Art Club, and when her children were younger she was a leader for the boy and girl scouts.
In her spare time, Luella enjoyed crossword puzzles, craft projects and baking. She was famous for her round banana bread and delicious apple pie. She had also been an avid seamstress accomplishing the difficult task of sewing her own wedding dress.
Luella will be remembered as being a dedicated, understanding, and loving mother who was always there for her family. She was very proud of her children and grandchildren and the time she spent with her family was invaluable to her.
Luella is survived by her husband Kenneth Jensen of Breckenridge, MN; her daughter Muriel (Charles) Joop of Borup, MN and her son Douglas (Jeanne) Jensen of Hopkins, MN; her grandchildren Gregory Joop, Kristina Jensen, Petra Jensen; her sisters Susan Sorenson of Woodbury, MN and Marilyn Krogh of Fort Collins, CO; and many nieces and nephews.
Luella is preceded in death by her parents Arthur and Kate Lewis; her granddaughter Karolyn Joop; her siblings Milford Lewis, Beatrice Lewis, Elda Gill, Verne Lewis, Evelyn Lewis, Leona Anderson and Charles Lewis.
To order memorial trees or send flowers to the family in memory of Luella Jensen, please visit our flower store.