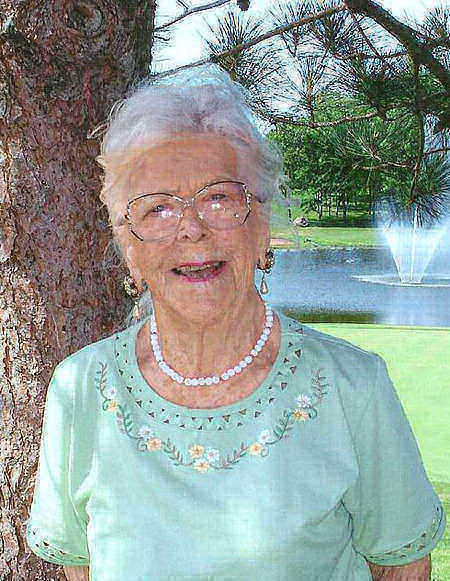 Lyla Victoria (Rice) Dalva, 104 of Breckenridge, MN formerly of Benson, MN died May 10, 2012 at St. Francis Nursing Home, Breckenridge. Lyla was born Spt. 11, 1907 to Gunhild (Braaten) and Lewis Rice in Kerkoven Township where she attended school at the Carlson Public School, District N. 66. She was baptized and confirmed in the Lutheran faith at Spring Creek Church by Rev. H.E. Baalson.
As an adult, Lyla moved to Benson, MN where she was manager of the S & L ready to wear department. She met many people there and one of them was the manager of the local grain elevator who asked her to work as the elevator's secretary. Lyla stayed in that position for 25 years. She often reminisced about her varied experiences during that time. When she met and later married Orvin Dalva, her efforts focused on being supportive of his farming career and managing her home. Her lawn and gardens were picture book pretty. She loved to cook and bake and kept her home immaculate. She entertained friends and family wherever she lived.
After Orvin's death, Lyla and her sister Leona decided to move to Breckenridge, MN to be closer to her nephew Jim Johnson and his family. Lyla and Leona each rented an apartment in the same building and had such fun dancing, shopping and traveling together. When a devastating flood occurred in Breckenridge they decided to move to Morris, MN where they once again, each rented their own apartment. They later returned to Breckenridge.
Lyla did not have children, but she claimed all of her nieces and nephews as her "grandchildren." She was always loving and generous with each of them. She will always be remembered for her delicious pies and the ten different kinds of bars she baked each Christmas until she was nearly 100 years old.
Lyla is survived by many nieces and nephews. She is preceded in death by her husband Orvin, her parents and eleven siblings.
Lyla has been entrusted to the care of Joseph Vertin & Sons Funeral Home, Breckenridge. The family will have a private memorial service for her at a later date.
To order memorial trees or send flowers to the family in memory of Lyla Dalva, please visit our flower store.