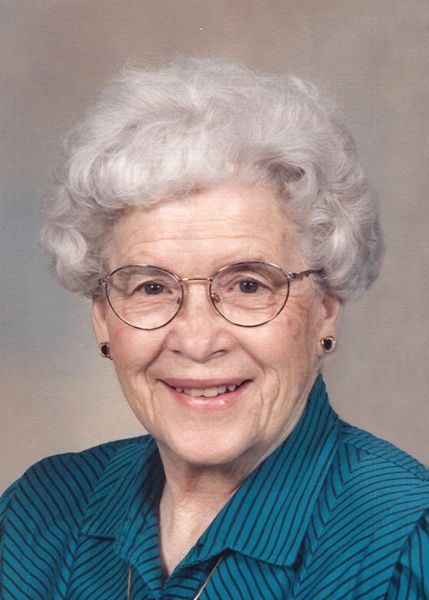 The funeral for Mabel will be Thursday, June 4, at 11:00 a.m. at the , Breckenridge, with Pastor Terry Tilton officiating.

Visitation will be Wednesday, June 3, from 4:00 pm to 7:00 pm with a prayer Service at 7:00 pm at Joseph Vertin & Sons Funeral Home, . There will also be visitation for one hour prior to the funeral at the church.

Mabel was born September 15, 1917 in Doran, MN, the daughter of Henry and Mazie (Mott) Hinze. She grew up and attended school in Doran and , and furthered her education at in . She then taught at for three years.

Mabel was united in marriage to Russel Hiedeman on September 7, 1940 at the Methodist church in . Following their marriage they made their home and farmed in Sunnyside Township of Wilkin County, MN, and in 1943 purchased their own farm where Russel farmed in partnership with his brother-in-law, Bob Petersen. They sold the farm in 1970 and moved into their home on in Breckenridge. Later they lived for a short time at the Park Manor in Breckenridge before becoming the first residents to move into the in Breckenridge. Russel preceded her in death on June 30, 2001. Mabel continued living at the until March of this year, when she became a resident of .

Mabel was a member of the and UMW in Breckenridge, and former member of the Sunnyside Homemakers Club. When her children were young she was active with Sunday school and 4-H.

Mabel enjoyed reading, gardening, crocheting, sewing, walking and doing crafts and always enjoyed the time she spent with her family, especially her grandchildren.

She was preceded in death by: Her parents: Henry and Mazie Hinze; Her husband: Russel Hiedeman; Her infant daughter: Mazie Jill; Her granddaughter: Kelley O’Donnell; Her sisters: June Twardy, Janis Wistad, Vesta Schnacky, Virgie Lindgren; and Her son-in-law: Buzzie Hansen.

To order memorial trees or send flowers to the family in memory of Mabel Hiedeman, please visit our flower store.