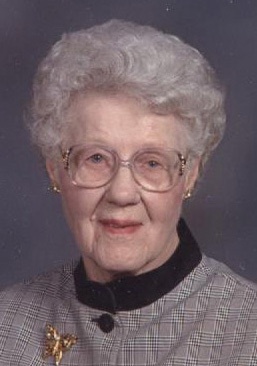 Mae Hiedeman, 97, of Breckenridge, MN, passed away peacefully at CHI St. Francis Home in Breckenridge, on Thursday, August 13, 2015. The visitation will be from 11:00 AM to 1:00 PM on Wednesday, August 19, followed by the funeral at 1:00 PM, at United Methodist Church in Breckenridge. Pastor Mark Gronseth will be officiating. The interment will be at Oak Grove Cemetery in Fergus Falls, MN at 3:30 PM.
Mae Ocenia Lankow was born on October 1, 1917 to Henry and Jessie (Martin) Lankow in Foxhome Township. She attended Country School District #62 and was a member of the Breckenridge United Methodist Church. Mae was united in marriage to Harold Franklin Hiedeman on March 22, 1940 at her home church. They made their home together in Sunnyside Township where Harold farmed and Mae was a true homemaker. They spent 61 years together and for 37 of those years they spent many enjoyable days at their home on Ottertail Lake. Mae belonged to 4-H and was a member of the Sunnyside Homemakers' Club for many of those years. She was known for her beautiful flower gardens, her delicious cooking, and home-made candy. She loved sewing, crafting, knitting, and crocheting. She was a gifted musician and spent countless hours playing the organ. She began playing accordion in her late teens. She and several cousins and friends formed a band and had the privilege of performing at the State Fair and many 4-H events.
Mae moved to her home in Breckenridge in 2002 then entered CHI St. Francis Nursing Home in October 2008.
Mae is survived by her sons, Norman (Kate) Hiedeman of Breckenridge and Raymond (Janice) Hiedeman of Sebeka, MN; her grandchildren, Kim Fuder of Bismarck, Kevin (Ann) Hiedeman of Breckenridge, Kari (Brian) Johnston of Warroad, MN, Darrell (Nicole) Hiedeman of Minneapolis, MN; her great-grandchildren, Nathan and Jacob Fuder, Noelle (Jim) Green, Erik, Jack, and Tommy Hiedeman, Hannah, Katie and Marlie Johnston, Jordan and Lauren Hiedeman; her great-great grandchild, Molly Green; her siblings, Beatrice Kusch of Marion, IA, Marilyn (Alwyn) Martinson of Vergus, MN, Ardis (Gordon) Martinson of Breckenridge, MN, and Phyllis (Herbert) Hiedeman of Wahpeton, ND; Henry Lankow of Cedar Rapids, IA; her sisters-in-law, Peggy Huelsman, Barb Hiedeman, Ethel Petersen, and Virginia Lankow; her brother-in-law Raymond Hiedeman; and several nieces and nephews.
Mae is preceded in death by her parents, Henry and Jessie; her husband, Harold (June 18, 2001); her son Neil (August 14, 2006); her grandson, Scott Hiedeman; and her brothers, Cecil, Raymond, and Francis Lankow; and her brothers and sisters-in-law, Henry Kusch and Richard Hiedeman, George and Monica Hiedeman, Russ and Mabel Hiedeman, Earl and Jackie Hiedeman, Cora and Armand Johnson, and Warren and Hazel Hasbargen.
To order memorial trees or send flowers to the family in memory of Mae Hiedeman, please visit our flower store.