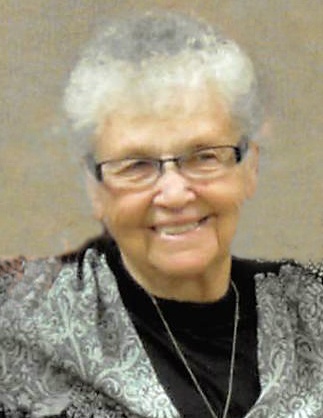 Marceen was born on April 9, 1932, to Mearl and Ilo (Abraham) Stargel. She grew up on the family farm near Campbell and attended school there, graduating in 1950. She was united in marriage to Bernard Loeks in June of 1950. They made their home on their farm near Campbell where they were blessed with four children. Alongside raising her children, Marceen enjoyed helping Bernard on the farm and actively participating in church. After 62 years of marriage, Bernard passed away on September 19, 2012, and Marceen continued to live on the farm until August of 2013. She then moved to Twin Town Villa in Breckenridge, where she was loved by the workers and staff.

Always one to keep herself busy, Marceen stayed active all throughout her life enjoying hobbies such as ceramics, swimnastics, and square-dancing. She was also active in the Homemakers Club and always volunteered her time at the church to help in any capacity. Above all, her greatest joy was being surrounded by her family during holidays and sports activities; she never missed a single event. Marceen had a heart that overflowed with a desire to help others and she constantly welcomed any time spent with her family and friends.

She was preceded in death by her loving husband, Bernard Loeks; parents, Mearl and Ilo Stargel; and brother Veldon Stargel.

To order memorial trees or send flowers to the family in memory of Marceen "Joy" Loeks, please visit our flower store.