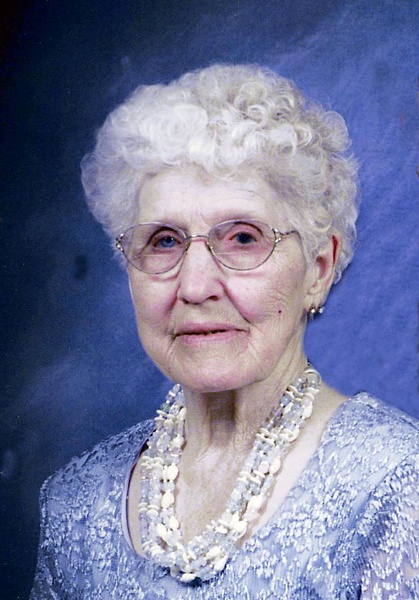 Margaret Hazel Hoffard, 95, of Wahpeton, ND, passed away on Thursday, September 29, 2016, at St. Catherine's Living Center in Wahpeton. The visitation will be from 5:00 to 8:00 PM, with a prayer service at 7:00, on Monday, October 3, at Joseph Vertin and Sons Funeral Home in Breckenridge, MN. The visitation will continue on Tuesday, October 4, from 10:00 to 10:45 AM, at St. John's Catholic Church in Wahpeton, followed by the Mass of Christian Burial at 11:00. The interment will be at Hillside Cemetery in Hankinson, ND. Father Jim Tiu will be the Celebrant.
Margaret "Maggie" Herrmann was born on December 3, 1920, to Conrad and Barbara (Schmailzl) Herrmann, on a farm near Barry, MN. Her family moved to rural Wheaton, MN, where she attended country school. She was united in marriage to Clifford Oliver Johnson in January of 1940, at White Rock, SD. Together they farmed near Wheaton and raised thirteen children. Later they moved to rural Charlesville, MN, where Clifford worked at the local Elevator until he died suddenly in April of 1961.
Maggie and the children then moved to Tintah, MN. In November of 1961, she married Richard Winefeldt and the family relocated to Hankinson, ND. Her and Richard enjoyed rug making and did some shoe repair work on the side. She was employed at various local places until Richard passed away on July 1, 1979. Two years later, Maggie moved to Wahpeton where she found employment at the Fry-N-Pan Restaurant and then eventually at the 3M Plant. It was there that she met John Hoffard and they were united in marriage on April 16, 1981. Maggie retired from 3M on June 1, 1987. After retiring, she filled her days by volunteering at different places throughout the community. John passed away on June 20, 2005.
A grateful and kind heart, the depth of which can only be born out of the hardships of burying three husbands and four children, Maggie put others ahead of herself. She served in the VFW Ladies Auxiliary in Wahpeton, St. John's Catholic Church and loved to volunteer as Bingo helper at St. Catherine's. She was member of the Wahpeton Eagles Club where she proudly accepted the Mrs. Eagle Award and Mother of the Year Award. She loved to go dancing at the Eagles, playing the harmonica, and listening to 'old time music.' Her crowning glory was her family and spending time with them was among her greatest treasures.
Maggie will be missed by her children, Clifford (Betty) Johnson of Donnelly, MN, Carol (Gordon) Hall, of Morris, MN, Connie Welters of Wahpeton, ND, Marshall (Linda) Johnson of Gwinner, ND, Hazel (James) Prahl of Hoffman, MN, Sue (Dennis) Howey of Gwinner, ND, Tim Johnson of Duluth, MN, Roger (Deb) Johnson of Battle Mountain, NV, and Barry (Carolyn) Johnson of Fergus Falls, MN; her 19 grandchildren, 36 great-grandchildren, and 2 great-great grandchildren; and several nieces and nephews.
She was preceded in death by her parents, Conrad and Barbara; her husbands, Clifford Johnson, Richard Winefeldt, and John Hoffard; four children, Conrad, Ervin, June, and baby girl Johnson; a grandson, Doug Johnson; her brothers, George, Herman, Walter, Robert, Conrad, Ervin, and Carl; and her sisters, Martha Rath, Hazel Gibson, Pearl Arndt, and Elsie Jorschumb.