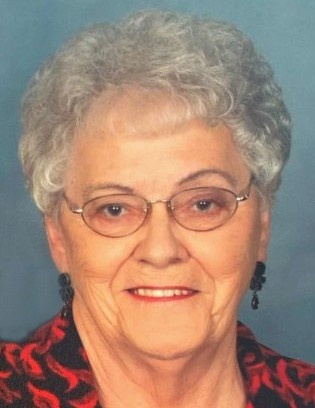 Marie Caroline (Bach) Beyer, age 93, of Breckenridge, quietly went home to be with the Lord she so dearly loved early Saturday morning, January 9, 2021, at CHI-St. Francis Hospital, Breckenridge.  A Mass of Christian Burial will be held at St. Mary's Catholic Church, Breckenridge, on Wednesday, January 13, 2021, at 12 noon, with visitation from 10:30 a.m to noon. Interment will follow at St. Mary's Cemetery, Breckenridge. Due to COVID restrictions, masks are required and social distancing maintained.

Marie (Bach) Beyer was born on September 30, 1927, near White Rock, SD, to Louis and Anna (Differding) Bach. Thereafter, moving to a farm near Campbell, MN, where she spent most of her childhood. She later moved to Breckenridge with her sister, Dorie, and worked in numerous restaurant establishments. In 1961, she was united in marriage to Robert Chipera and they made their home in Doran, MN, and from that union, Patricia was born in December of 1962. In May of 1962, Robert passed away. In 1967, Marie married Herbert Beyer and moved to the farm in Sunnyside Township, and added two sons to the family, Mark and Kevin.

Marie enjoyed the outdoors; especially mowing the yard (she found it relaxing) and helping at the farm by driving trucks and tractors. Marie was the true picture of a farm wife! In 1990, they moved to Breckenridge. Though city folk, they still had farming in their blood. Our family spent many years enjoying Otter Tail Lake. Eventually, mom and dad did some camping with mom’s sister, Margaret, and her husband, Donald, and several years with Mark and Jodi and their family. The grandchildren were very special in her life and she was always so happy to see them and attend their many activities.

Since September of 2020, Marie has resided with Mark and Jodi and their family. Just as we were all thrilled to have her there, she was just as happy to be there. She had a green thumb and could grow plants that never died, it seemed. Mom and dad had a lot of good times together and made many dear friends. They enjoyed going to the Eagles and Vet’s Club to play bingo and trips to the casino. She was always lucky and dad often would tease her about that. She completed many puzzles and puzzle books and was up for a game of solitaire now and then. For many years, she enjoyed bowling with her friends, and afterward, a trip to Casey’s Bar for a few. Marie was hoping to get back up to Casey’s soon but God had other plans for her. Mom was a very classy lady and one of the strongest people in our lives. She has blessed us with many memories.

Marie is survived by her daughter, Patty (Tom) Kloster; son, Mark (Jodi) Beyer, all of Breckenridge; grandchildren, Seth Klostreich of Grand Forks, ND, Alison, Nicholas, and Justin Beyer, all of Breckenridge; and one sister, Loretta Althoff of Hankinson, ND. She was preceded in death by her parents; her husbands, Robert and Herbert; her son, Kevin; brothers, Frank Bach, John Bach, and Lawrence Bach; sisters, Susanna Herding, Margaret Leinen, and Dorothy Schreiber; and other loved ones.

Our Mom and Grandma will always be loved and missed.

To order memorial trees or send flowers to the family in memory of Marie Beyer, please visit our flower store.