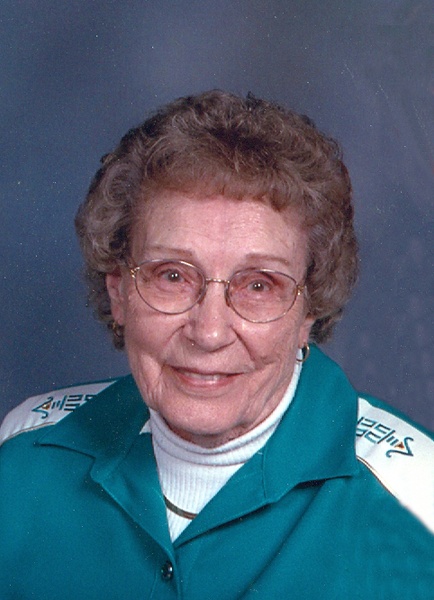 Marie "Sis" C. Oliphant, age 95, of Foxhome, MN, passed away on Thursday, December 31, 2015, at St. Francis Healthcare Campus in Breckenridge, MN. The funeral service will be at 11:00 AM on Tuesday, January 5, 2016 at United Methodist Church in Breckenridge, with Pastor Terry Tilton and Pastor John Andrews officiating. There will be a visitation on Monday, January 4, 2016 from 5:00 PM to 8:00 PM, with a prayer service at 7:00 PM, at Joseph Vertin and Sons Funeral Home in Breckenridge. The visitation will continue one hour prior to the service at the church on Tuesday. Burial will be at Oak Grove Cemetery in Fergus Falls, MN. Joseph Vertin and Sons Funeral Home in Breckenridge is assisting the family with arrangements.

Sis was born on September 6, 1920 to Ole and Clara (Peterson) Johnson, in Minot, ND. While she was young, the family moved to Foxhome, MN, where she attended country grade school. She graduated Salutatorian from Campbell High School. After graduation, she worked at Roy Andrew's grocery store in Foxhome.

Sis married her long-time sweetheart, Blain Oliphant, on November 14, 1951 in Breckenridge. They moved to San Diego for a brief time, before returning to Foxhome, where they had their son, Danny. Sis continued working at the grocery store until the 1980's. In 1977, she started working the books for the Foxhome Bar, where she also began serving as a bartender. She was City Clerk in Foxhome for many years.

Sis enjoyed gardening; being a hostess and entertaining; "making camp" on trail rides; baking; and spending time with her family and friends.

She was preceded in death by her parents; her husband, Blain; her brothers: Donald Johnson, and Vernon Johnson; and her sisters: Lucille Harry, and Delores Langston.
To order memorial trees or send flowers to the family in memory of Marie Oliphant, please visit our flower store.