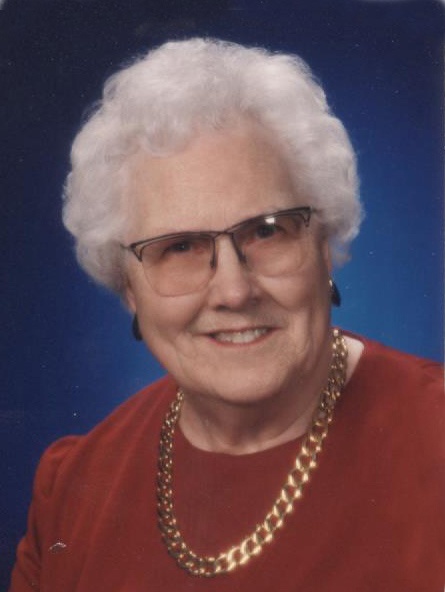 Marie Thuente, 96, of Breckenridge, MN, passed away at St. Francis Health Care Campus in Breckenridge on Sunday, January 18, 2015. The visitation will be at Joseph Vertin & Sons Funeral Home on Tuesday, January 20, from 5:00 to 7:00 PM with a prayer service at 5:30 PM. The Mass of Christian Burial will be at 10:30 AM, on Wednesday, January 21, at St. Mary's Catholic Church in Breckenridge. Father Joseph Backowski and Father Jerry Nordick are the Celebrants. Interment will be at St. Mary's Cemetery in Breckenridge.
Marie was born on the family farm near Kent, MN, on June 27, 1918, one of four children born to William and Mathilda (Nordick) Thuente. She was raised on the family farm and attended country school. Following her schooling, she worked for neighboring families in the Kent area. In 1949, she began working as a housekeeper in Glenwood, MN, for Father Dimmerling. When Father Dimmerling became bishop in 1969, Marie moved with him to Rapid City, SD. Following his passing in 1987, Marie moved to Breckenridge to be closer to her family. She was housekeeper for 38 years, dutifully serving several different priests during that time.
Marie enjoyed knitting, crocheting, and solving word puzzles. She was a talented quilter. She had sewn hundreds of quilts for others, of which her favorite pattern was the Lone Star quilt. She was a member of the St. Margaret's Court of Foresters and St. Mary's Catholic Church. Marie was the 'favorite aunt' to all of her nieces and nephews
Marie is survived by her sister, Dolores Holecek of Breckenridge; sister-in-law, Marilu Thurman of Canyon City, CO; 9 nieces and nephews; 15 great- nieces and nephews; and many great-great nieces and nephews. She is preceded in death by her parents, William and Mathilda; and her brothers, Clarence and Dennis; and her brother-in-law, Bernard Holecek.
To order memorial trees or send flowers to the family in memory of Marie Thuente, please visit our flower store.