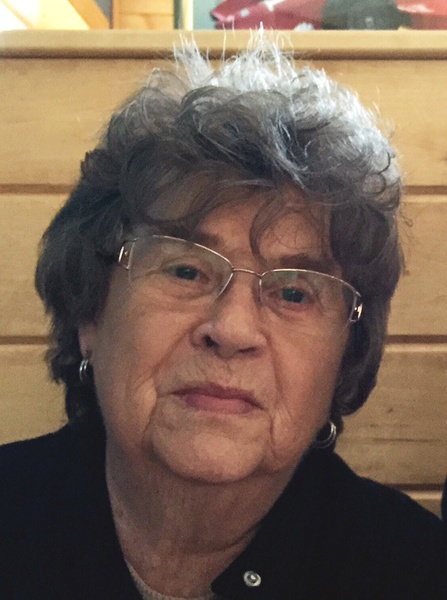 Marilyn Jean McChesney, 82, of Campbell, MN, passed away on August 18, 2015, at Perham Health, in Perham, MN. The visitation will be on Friday, August 21, at Breckenridge Lutheran Church, from 10:00 to 11:00 AM, followed by the funeral service at 11:00. Pastor Mark Manning will be officiating. The interment will be at Riverside Cemetery in Campbell. Marilyn has been entrusted to the care of Joseph Vertin & Sons in Breckenridge.
Marilyn Johnson was born on December 31, 1932 in Leeds, ND, one of ten children born to Clarence and Gunda (Rodland) Johnson. She grew up and attended school in Leeds, and then graduated from Devils Lake High School in 1950. Following graduation, she was employed at the court house in Devils Lake. On September 8, 1956, Marilyn was united in marriage to James McChesney in Devils Lake. The following day, the couple moved to Mayville, ND where James attended Mayville State Teachers College and Marilyn was secretary to the President of the college. After James graduated, they relocated to Waubun, MN, upon accepting a teaching position there. Four years later, they moved to Kindred and Marilyn commuted to her job at Fargo Central High School. In 1966, they moved to Campbell, and she began a 40 year career as a legal assistant at a law firm in Wahpeton. She was passionate about her job and worked well into her 70's.
When Marilyn wasn't working, she enjoyed spending time with her family. She treasured the time spent with family and friends at their lake cabin, and made everyone feel welcome. She enjoyed cooking, and was a master at preparing delicious meals for big family gatherings or spur of the moment drop-in company. Marilyn enjoyed gardening and reading a good book. She loved to play cards, especially Bridge, and was known to be a shopping enthusiast.
Marilyn is survived by her husband, James of Campbell; her two daughters, Jane (Mark) Kelly of West Fargo, ND and their daughter Alison; and Karen (Stephen) Georgakas of Ellsworth, WI and their children, Darren, James, and Alexandra; her siblings, Odella (Charles) Henley of Valley City, ND, Doris (Audun) Odegaard of Camano Island, WA, Ruth (James) Maher of Snohomish, WA, Richard Hanson of Monroe, WA; Shirley Farland of Mandan, ND, and Betty Allen of Wilmington, NC; and several beloved nieces and nephews. Marilyn was preceded in death by her parents, Clarence and Gunda; her grandson, Alexander; and three brothers, Lester, Curtis, and Gerald.
To order memorial trees or send flowers to the family in memory of Marilyn McChesney, please visit our flower store.