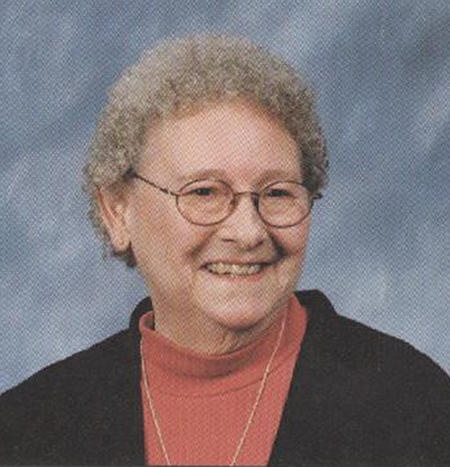 Marilyn Nelson, 83, of Breckenridge, MN, died Monday, December 23, 2013, at St. Francis Nursing Home in Breckenridge. The visitation will be held from 5:00 to 7:00PM, with a prayer service at 7:00, on December 27, 2013, at Joseph Vertin & Sons Funeral Home in Breckenridge and again from 10:00 to 11:00AM preceding the funeral at the church. The funeral will be held at 11:00AM, Saturday, December 28, at Breckenridge Lutheran Church with Pastor Mark Manning officiating. The interment will be at Comstock Cemetery following a lunch and fellowship.
Marilyn was born on February 20, 1930, the only daughter of Rudolph and Lella (Cornish) Possehl in Pontiac, MI. She grew up in Comstock, MN and graduated in 1948 from Comstock High School. Following graduation, she worked for the Standard Octane Company in Moorhead, MN. On September 29, 1950, Marilyn was united in marriage to the love of her life, DuWayne Nelson, at Comstock Lutheran Church. During the first years of marriage, DuWayne was in the National Guards, stationed in Alabama, so Marilyn lived at home with her parents. Upon his return, the couple moved to Comstock, where they were blessed with a daughter, Val, and son, Craig. In 1959 they moved to Clifford, ND, where they were blessed with one more daughter, Theresa. The family then moved to Kent, MN, where DuWayne accepted a position as manager of Schuler Grain Company. Marilyn was hired as a cook in the dietary department at St. Francis Nursing Home in 1967, where she remained employed for the next 17 years. In 1973, Marilyn and DuWayne purchased a home on West Battle Lake. They fulfilled their retirement dream when they made their lake home their permanent residence in 1989. After DuWayne passed away in 1996, Marilyn moved to Breckenridge to be closer to family.
Marilyn was an avid reader. She spent time watching her favorite television shows and listening to all kinds of music. She enjoyed receiving company, and always had coffee and cookies ready. Her greatest love and passion, though, was her children and grandchildren. She was able to attend and take part in many of their activities and was able to be a part of each one's weddings.
Marilyn is survived by her children, Val (Bernie) Manock of Breckenridge, Craig (Susan) Nelson of Spring Hill, FL, and Theresa (Ed) Nelson-Cox of Hibbing, MN; her grandchildren, Laura (Terje) Heggem, of Wahpeton, ND, Jill (Tavis) Scheller of Jacksonville, AK, Joshua (Corinne Shor) Nelson of Los Angeles, CA, and Jessica (Kevin) Krogstad of Hays, KS; a great-granddaughter Emma Scheller; and her brother, Ralph (Jeanne) Possehl of Moorhead, MN.
Marilyn was preceded in death by her husband DuWayne, and her parents Rudolph and Lella.
To order memorial trees or send flowers to the family in memory of Marilyn Nelson, please visit our flower store.