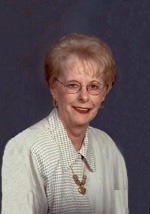 Her funeral will be at 11:00 a.m. on Thursday, October 25, 2007, at the United Methodist Church in Breckenridge, MN, with the Rev. Terry Tilton officiating.

Burial will be at the Greenwood Cemetery in New York Mills, MN.

Marilyn married Jack L. Thompson on October 11, 1958, in Wadena, MN. They lived in several different states including Louisiana, California, and Wisconsin, while Jack served in the United States Air Force. Following Jack's retirement in 1975, they moved to New York Mills, MN, and in 1987 moved to Breckenridge, MN, where Marilyn served Wilkin County as secretary for the Veteran's Service Office for fourteen years. She retired in 2001.

Marilyn enjoyed walking, bicycling, reading, spending time with friends and family, especially her eight grandchildren. She was a wonderful daughter, wife, sister, mother, grandmother, and friend and will be sadly missed by all.

Preceding her in death were her parents Harold and Marjorie Anderson.

To order memorial trees or send flowers to the family in memory of Marilyn Thompson, please visit our flower store.