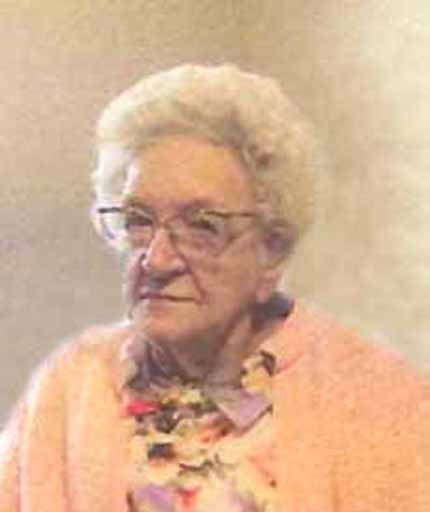 Marvel (Edenstrom) Johnson, 92, of Breckenridge, MN, formerly of Wolverton, MN, died January 18, 2008 at St. Francis Healthcare Campus, Breckenridge, MN. Her funeral will be held on Thursday, January 24, 2008 at 10:00 AM at the Eagle Valley Evangelical Free Church, Christine, ND, with Pastor Bob Grohman officiating. Visitation will be on Wednesday, January 23, 2007 from 4:00 PM to 6:00 PM at Joseph Vertin & Sons Funeral Home, Breckenridge, MN. There will also be visitation one hour prior to the funeral at the church. Burial will be at the Eagle Cemetery, Rural Christine, ND.

She is survived by: Her two stepsons: Marvin L. (Irene) Johnson, Helena, MT; and Arden E. Johnson, Moorhead, MN; and many nieces and nephews

Marvel Virginia Edenstrom was born December 6, 1915 in Wolverton, MN, along with her twin sister, Mildred Violet Edenstrom, the daughters of Axel and Hilda (Alm) Edenstrom. Following graduation from high school, Marvel worked in Wolverton and took care of her parents on their farm located south of Wolverton until they passed away in October 1948. On October 29, 1949, she married Alfred Johnson. Following their marriage, Alfred and Marvel made their home on the family farm. Alfred passed away from cancer in 1972. Marvel stayed on the farm several years following Alfred's death and later moved to Wolverton. Marvel was a companion and caregiver for her twin sister, Mildred Edenstrom, until Mildred moved into the St. Francis Home in Breckenridge, MN. Eighteen months later, in July, 2000, Marvel joined Mildred at St. Francis.

Marvel was a member of the Evangelical Free Church in Wolverton. She enjoyed Bingo, board games, puzzles, crocheting, and the company of family and friends.

Marvel's family expresses their sincere thank you to her friends and all who have visited Marvel, helped her and kept her in their prayers over the years.