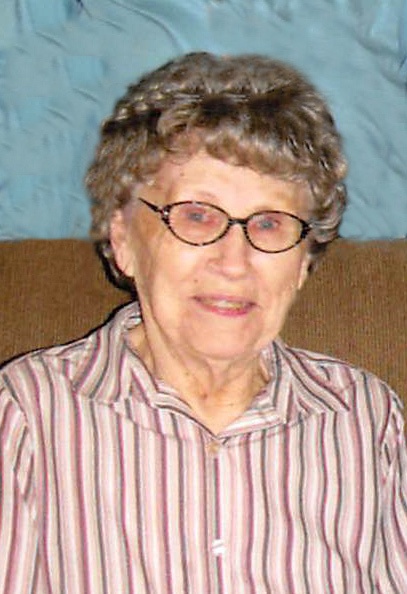 Mary Eileen Schreiber was born on October 23, 1923, in Fairmount, ND, one of six children born to August and Anna (Dorn) Schreiber. She attended country school near her home and then attended Wahpeton High School. She was united in marriage to Joseph Dauer on January 29, 1941. The couple lived near Galchutt, ND, for six years before moving to their farm place east of Breckenridge. They were blessed with eight children and a great propensity for family and hard work. On April 24, 1975, at the age of 61, Joe passed away. Five years later, Mary moved to Fargo, ND, where she volunteered at St. Vincent's Thrift Store for over 20 years. On April 11, 1990, she was united in marriage to Glenn Heaton and they were blessed with twenty years together before he passed away in 2010.
After Mary's children were grown, she went to work as a CNA at St. Francis Nursing Home in Breckenridge. She was able to incorporate her love and skill for sewing with her job at St. Francis as she fit their needed sewing and mending into her schedule. She was a fabulous cook and famous for her fried bread and potato salad. She loved to gather her family around the dinner table, a tradition which inspired happy memories and a close-knit family. Mary had a knack for gardening and looked forward to the harvesting and canning of her produce. When they were younger, she and Joe loved to go dancing and playing cards.
Mary is survived by her eight children: sons, Richard (Judy) Dauer of Jamestown, ND, Rodney (Cheri) Dauer of Fargo, ND, Brian Dauer, of Colorado, and Bruce (Joan) Dauer of West Fargo, ND; daughters, Phyllis (Al) Holzbauer of Breckenridge, MN, Jo Anne (Ken) Ness of Westerville, OH, Lorraine (Jack) Batten of Warrington, GA, and Teresa Grammond of Hazen, ND; 22 grandchildren and many great-grandchildren; her stepchildren, Phyllis Hohle of Fargo, ND and Susan Rooney of Schaumberg, IL. She is preceded in death by her parents, August and Anna; her first husband, Joseph Dauer and her second husband, Glenn Heaton; her siblings, Delphia Johnson, Kathryn Stein, Leila Blain, Alvin Schreiber, and Elroy Schreiber; her son-in-law, Ed Grammond; and her great-granddaughter, Grace Dauer.
To order memorial trees or send flowers to the family in memory of Mary Dauer-Heaton, please visit our flower store.