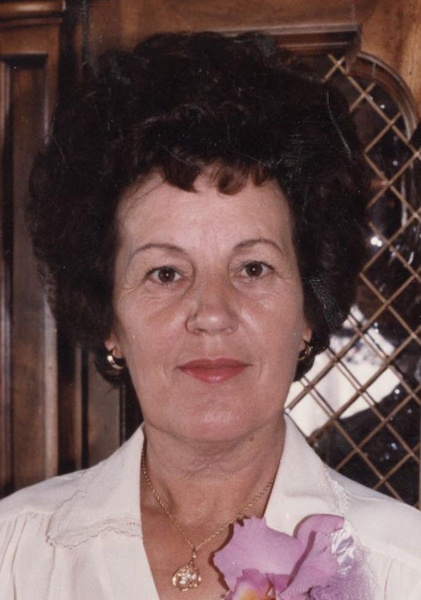 Maxine Marie Schuler, age 83, of Fargo, ND, formerly of Wahpeton, ND, and Campbell, MN, passed away on Friday, February 7, 2014, under Hospice Care in her son's home. There will be a visitation on Wednesday, February 12, 2014, from 4:00 PM to 7:00 PM, with a prayer service at 7:00 PM, at Joseph Vertin & Sons Funeral Home in Breckenridge, MN. The funeral service will be at 11:00 AM, on Thursday, February 13, 2014 at Vukku Lutheran Church, rural Foxhome, MN, with a visitation one hour prior to the service at the church. Pastor John Andrews will be officiating. Interment will be at Vukku Lutheran Cemetery.
Maxine Marie was born on September 1, 1930, to Edward and Anita (Kakeldey) DeBus, in Welcome, MN; where she grew up and attended school. On October 6, 1946, she was united in marriage to Fredric "Fritz" Schuler in Spafford, MN. They were blessed to be the parents of five children. They moved to a farm in rural Campbell, MN in 1952. Maxine worked alongside of Fritz, as the bookkeeper for the Campbell Fertilizer Plant, which he owned and operated. In 1968, she and Fritz began spending winters in Mesa, AZ, a pleasurable tradition which continued until 1999.
Maxine built many lifelong friendships as the result of her memberships in Eastern Star, the Mason Temple, and the birthday club. She was also an active member of Vukku Lutheran Church. Holiday gatherings were very precious to Maxine, finding much joy in creating a festive, warm welcome for family and friends. She took pleasure in flower gardening and playing cards. Most recently, her hobbies included bird watching-especially Trumpeter Swans and Loons.
Maxine is survived by 2 sons, Gary (Pam) Schuler of Moorhead, MN, and their children, Todd (Jeannine) Schuler, and Jenny (Dain) Miller; Gregg (Judy) Schuler of Fargo, ND, and their son Ryan (Summer Gutknecht); her daughter-in-law, Darlene Schuler of Wahpeton, ND, and her children Chad Schuler, Nathan (Heather)Schuler, Eric Schuler (sons of Mick); and grandchildren Amanda (Jon) Brazil (daughter of Tonya) and Nicole Slavik (daughter of Marc); 13 great-grandchildren and 1 great-great grandchild; 2 brothers, Jerome DeBus of Rochester, MN, and Eugene (Marsha) DeBus of Owatonna, MN.
Maxine is preceded in death by her parents, Edward and Anita DeBus; her husband, Fredric Schuler; her sons, Marc and Mick Schuler; her daughter Tonya Schuler; 4 brothers, Donald, Duane, Lowell, and Richard DuBus; and a sister, Colleen Traetow.

Maxine Marie Schuler
To order memorial trees or send flowers to the family in memory of Maxine Schuler, please visit our flower store.