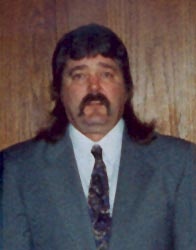 Michael Leonard Botner, 57 of Breckenridge, MN passed away in his home on February 21, 2011. The visitation is at 6:00 pm - one hour prior to the funeral- Monday, February 28, 2011 at Joseph Vertin & Sons Funeral Home, Breckenridge, MN. The funeral is February 28 at 7:00 pm at Joseph Vertin & Sons Funeral Home.
Mike was born November 18, 1953 to Kenneth and Irene (Hurley) Botner in Lamoure, ND. He grew up and attended schools in Gwinner, ND and graduated in 1972. He worked for Bobcat in Gwinner for several years then moved to Bismarck, ND to work at the Bobcat plant there. He then moved to Fargo, ND where he drove for Asplin Trucking Company. Mike eventually moved to Breckenridge, MN and drove seasonally for Three Rivers Trucking in Wahpeton, ND.
In his spare time, Mike loved fishing, riding his Harley and grew some of the best tomatoes around. He will be remembered for the thoughtful, quiet way he approached life.
Michael is survived by his mother Irene Botner of Gwinner, ND; his two brothers Charles (Sonya) Botner of Vail, AZ and their daughter Sina; Bryon (Kathy) Botner of Mapleton, ND and their two children Aaron and Jesse; his two sisters Kathy (Mark) Lyons of Roseville, MN; Vivette Botner and her children Sol, Chanae and Kaitlyn of Duluth, MN. Michael is preceded in death by his dad Kenneth Botner; his brother Kenneth Jr. "Butch" Botner; his sister Patty Thompson.
To order memorial trees or send flowers to the family in memory of Michael Botner, please visit our flower store.