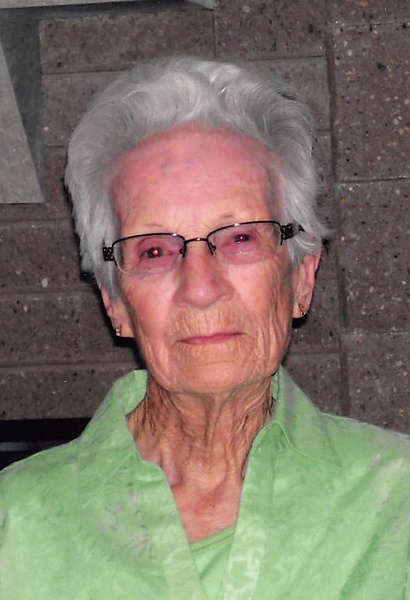 Mildred Bernice Tobeck Rude, 97, of Breckenridge, MN, passed away at CHI St. Francis Home in Breckenridge, on Thursday, January 5, 2017. The visitation will be from 5:00 to 7:00 PM, with a prayer service at 7:00, on Thursday, January 12, at Joseph Vertin & Sons Funeral Home in Breckenridge. The visitation will continue from 9:30 to 10:30 AM, on Friday January 13, at First Baptist Church in Breckenridge, followed by the funeral at 10:30. Pastor Peter Erickson will be officiating. The interment will be at Riverside Cemetery in Breckenridge.
Mildred "Millie" Lancaster was born in Knowlton, Montana, on April 11, 1919, the third child born to William and Emma (Wildman) Lancaster. At a young age, Millie's family moved to Bertram, MN, where she attended country school through the eighth grade. The TobecK family then moved to Wheaton, MN, where Millie worked for various farmers helping out with house work, taking care of children, and doing farm chores. In 1941, she was united in marriage to John Tobeck in Minneapolis, MN. The couple made their home near Wheaton and then later moved to Breckenridge. In 1966, she and John moved to a farm south of Breckenridge. Two years later, they built a new home on the site. John passed away in 1979 and Millie continued to live on the farm. In 1988, she married LeRoy Rude and they enjoyed eleven years together before he passed away in 1999.
Millie was an active member of First Baptist Church in Breckenridge and the Senior Citizens Center in both Wahpeton and Breckenridge. She enjoyed playing cards, especially Hand and Foot. She was a gifted seamstress and loved to crochet but her true passion was spending time tending her garden and grooming her yard. She also looked forward to harvesting her garden and then canning and freezing the produce. She was an avid reader and cherished her quiet time reading the bible.
Millie is survived by her children, Ronald Tobeck of rural Breckenridge, Alene (Leslie) Dormanen of Wheaton, Ill., Judy (Dick) Gira of rural Breckenridge, and Wayne (Bonnie) Tobeck of Ham Lake, MN; her four grandchildren, eleven great-grandchildren, and two great-great grandchildren. She was preceded in death by her parents, William and Emma; her first husband, John Tobeck and her second husband, LeRoy Rude; her daughter, Patricia Differding; her granddaughter Sara Differding; her grandson, Shawn Gira; her sister Mary Bullock; and two brothers, William and Robert Lancaster.
To order memorial trees or send flowers to the family in memory of Mildred Rude, please visit our flower store.