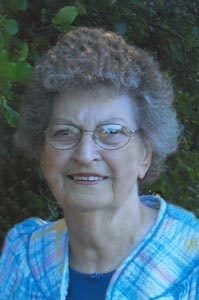 Her funeral will be held on Friday, September 5, at 10:30 AM at the , in Breckenridge, with Pastor Terry Tilton officiating.

Visitation will be Thursday, September 4, 2008 from 4:00 PM to 7:00 PM with a Prayer Service at 7:00 PM at Joseph Vertin & Sons Funeral Home, . There will also be visitation for one hour prior to the funeral at the church.

She was preceded in death by: Her parents: and Avis Kegley; her husband: Richard “Dick” Thompson; Her two daughters: Kathryn Ann and Carol Rae; Her brothers: Carl, Earl, Lyle and Kenneth; Her sisters: Prudence, Bernice, Harriet and Lois

Myrtle was born on April 22, 1935 on a farm north of , , the youngest of nine children born to and Avis (Nendick) Kegley. At the age of five Myrtle moved with her family to . She attended school in Tenney and later in . Myrtle loved growing up in Tenney and often spoke of roller skating, dancing and carrying water from the town pump to home while living there. She did a lot of babysitting during her school years and also worked for other families in the Tenney area. In 1953 she moved to Breckenridge and worked at in the X-Ray department, a job she had fond memories of. She also worked at the Rex Café in Wahpeton, ND. Myrtle later moved to and , where she worked at various places as a waitress, and also as a clerk at dime stores and grocery stores.

In 1954, Myrtle was married to John Sorum in . To this union six children were born, of which two died in infancy. They lived in and later moved to . In 1971 they moved to . In Breckenridge, Myrtle worked at the Rock Garden Bar and Earl’s Bar for 8 ½ years.

Myrtle, always an upbeat person, was willing to lend a helping hand to anyone who needed it. She was always there for her neighbors, family and friends. meals were important to Myrtle and she often invited friends and acquaintances into her home that would have otherwise spent the holiday alone. She also enjoyed planning family reunions and staying connected with her nieces and nephews.

Myrtle wasn’t above pulling a joke on someone but was also big enough to take a joke pulled on her. She was quick witted and known to speak her opinions and offer her advice. She enjoyed playing cards, reading, crocheting, doing picture puzzles and making small quilts for her grandchildren. She always had time for her grandchildren and loved playing board games with them. Myrtle always had the coffee pot on and she truly enjoyed when people would drop in for a cup and conversation.

To order memorial trees or send flowers to the family in memory of Myrtle Thompson, please visit our flower store.