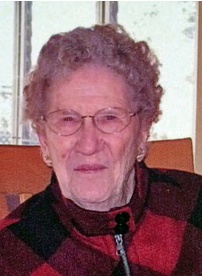 Norma H. Anderson, 90, of Wahpeton, North Dakota, died Saturday, April 11, 2015 at St. Catherine's Living Center, Wahpeton, North Dakota. Visitation will be at 10:00 a.m., Saturday, April 25, at Breckenridge Lutheran Church, followed by the funeral at 11:00 a.m. The Rev. Mark Manning will be officiating. There will be a luncheon served immediately following the funeral.
Norma was born October 30, 1924, in Denbigh, N.D., to Sigval and Ella (Vermedahl) Nelson. She grew up and attended school in Towner, N.D. Following high school graduation in 1943, she traveled to Seattle, WA to work for the US Army Corp of Engineers. In 1945, she returned to Towner and worked for 8 years for the County Treasurer, initially as a secretary, and then as the Deputy Treasurer. During this time she met her future husband, Donald Anderson. Donald contracted tuberculosis in 1947, and had to enter the San Haven Sanatorium in Bottineau, N.D., remaining there for 50 months to recover. When he was released, one of the first people he went to visit was Norma. On June 5, 1954, Norma was united in marriage to Donald L. Anderson of Willow City, ND, at Norway Lutheran Church, Denbigh, N.D. They moved to Wahpeton where Donald was enrolled in the Radio and TV Service program at the North Dakota State School of Science. Upon graduation in 1955, Don started his own business, Don's Radio and TV, in Breckenridge, MN.
Along with raising her three children, Norma worked with Don in the business until they retired in 1981. After retiring, they moved back to North Dakota to care for their parents. In 1993, they returned to the Wahpeton-Breckenridge area and reestablished old friendships. They had an additional 16 wonderful years together before Don's passing in 2009.
Norma was a member of Breckenridge Lutheran Church and served on the Wilkin County Draft Board. She also loved the many years she spent with her family at Star Lake, MN, often making stacks and stacks of pancakes for all of the weekend lake visitors. Later in life, she enjoyed keeping up with her family through frequent visits and weekly phone calls.
She is survived by her three children, David (Sheri Auclair) Anderson, Minnetonka, MN, and children, Jennifer, Michael, Sarah, and David; Nola (Mike) Froehle, Eden Prairie, MN, and children, Brad (Corinne Scown) and Katie; Mark (Eileen) Anderson, Shorewood, MN and children Eric and Chris; her special great-grandson, Nathaniel; and her sister, Avis Semrau (Gordon), Grand Forks, ND.
She was preceded in death by: her husband, Donald L. Anderson; her parents, Sigval and Ella Nelson; and her siblings, Irene Roalkvam and Kenneth Nelson.
In lieu of flowers please consider memorial donations in Norma's name to Breckenridge Lutheran Church (301 North 6th Street, Breckenridge, MN 56520) or St. Catherine's Living Center (1307 N 7th St., Wahpeton, ND 58075).
To order memorial trees or send flowers to the family in memory of Norma Anderson, please visit our flower store.