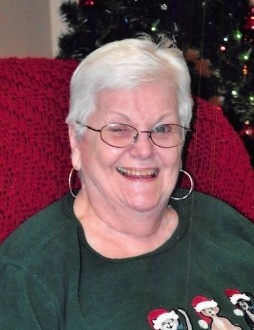 Norma Nordmark, 85, of Fargo, ND (formerly, Bottineau, ND), passed away at Bethany Retirement Living, Fargo, on Sunday, May 31, 2020. Due to the current health crisis impacting our country, a private service will be held in the coming days to honor Norma’s life. Expressions of sympathy during this time can be left on the condolences page available with the obituary on our website. We also encourage you to view the video tribute and/or webcast of the service that may be available. Arrangements have been entrusted to Joseph Vertin and Sons Funeral Home, Breckenridge.

Norma was born on July 4, 1934, to Ida and Albert Vikan at rural Bottineau, ND. She attended grade school at Vinje 45 and furthered her education at Bottineau High School, graduating as valedictorian of her class in 1952.

In 1953, she started nurses training at St. Andrews School of Nursing. In 1954, she married Marlin Nordmark. They lived in Bottineau where Marlin operated Westland Oil Service Station. Norma’s love for nursing urged her to return to nurses training, which she attended until illness forced her to quit.

In 1956, Norma and Marlin moved to Mohall, ND, where they operated another propane business for Westland Oil. Norma kept the books and was the office manager of this successful business for 28 years. I t was during his time that Marlin trained with the 77th Special Forces of the U.S. Army at Fort Bragg, NC, and served in Germany. His brother, Jim, and Norma managed the propane business. She helped farm during Marlin’s overseas tour and continued helping after his return home. Norma also worked at the Renville County ASCS and the Renville County Soil Conservation Service.

In Minot, Norma taught Sunday school and vacation Bible school for several years and was treasurer of St. Mark’s Lutheran Women’s Missionary League. When Marlin was elected secretary of the North Dakota LP Gas Association, Norma served as secretary, which was her role most of the time in Mohall, where she assisted Marlin’s bookkeeper and office manager for the propane business before the age of computers. Many high school girls assisted as part of the work-study program at Mohall Public School.

Norma and Marlin welcomed two foster children (sisters) into their home in 1966. Connie (12) and Debbie (8) Kotzer, became part of their family.

Norma and Marlin divorced in 1985. Norma then moved to Minot and studied at Minot State College, graduating with her BS in General Studies at the age of 77. She then moved to Twin Town Villa in Breckenridge, MN, to be closer to Debbie and Connie, who lived in Wahpeton.

She became a resident of St. Francis Home in 2012, where she continued to recover from a stroke that occurred during a craniotomy in 1974.

In her younger days, Norma liked to garden and cook, though reading historical and romance novels were always her favorite past time. She also enjoyed writing letters and studying history. Above all, Norma loved spending time with her family and friends, especially her grandchildren and great-grandchildren.

To order memorial trees or send flowers to the family in memory of Norma Nordmark, please visit our flower store.
Open