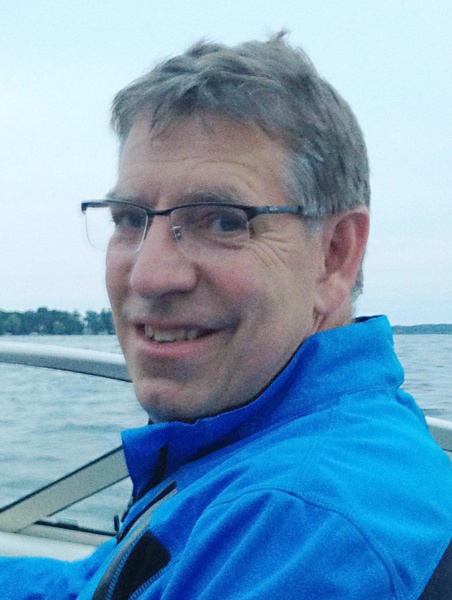 Randy Wayne Berndt- husband, father, son, brother, friend, teacher, coach, runner, and faithful servant of the Lord - died peacefully on Saturday, November 1, 2014, surrounded by family, friends, and the caring staff of Sanford Medical Center, following a sudden heart attack on October 26th. A celebration of life memorial service will be held at the Breckenridge Middle School Wednesday, November 5, from 4:30 to 8:00 PM with a prayer service at 7:00. The funeral will be 2:00 PM, Thursday, November 6th, at the Breckenridge Middle School, with Reverends Terry Tilton and Mark Gronseth officiating. Arrangements have been entrusted to Joseph Vertin & Sons Funeral Home in Breckenridge, MN.
Born August 9th 1962, Randy spent his intellectual life as an avid reader, math guru, and lifetime learner attending Breckenridge Public Schools, NDSCS, NDSU to study industrial engineering and eventually MSUM to study math education. Over his career he spent time working for Mycogen Seeds, Cinderwhit Company, and finished as a math teacher at Breckenridge Middle School. His most prideful work, though, was as a coach of the Breckenridge Cross-Country team where his passion for running and educating came together.
In his personal life he was a dedicated runner, crime novel aficionado, aspiring golfer, downhill skier, boat owner, water sport enthusiast, grill master, dog walker, church member, devoted husband, loving father, caring son and brother, and a friend to all. He enjoyed family trips that took him to all parts of the country with his best friend and wife, Jana, and three children, Tyler, Emily, and Matthew. He'll forever be remembered for his kind nature, calming presence, enduring patience, dry humor, everlasting faith, and constant knack to see the good in every situation. While his final act on this earth was his morning run with Max the dog, his eternal race is just beginning.
He was preceded in death by his mother, Vera; father, Delwood; godmother, Nelda Berndt; nephew, Jordan Berndt; grandparents, Anna and Irby Berndt, Melinda and Louis Schultze, and Clarence and Alice Lomsdalen; numerous special aunts and uncles.
His legacy lives on with the love of his life, Jana, his wife of 28 years; the prides of his life, Tyler, Emily, and Matthew Berndt; his future son-in-law, Mitchell Steele; his step-mother, Shirley; second parents, Gene and Marilyn Sipe, three brothers, Gary, Steven and Darlene, Keith, a sister, Amy and Rick; brother and sister in-laws, Mike and Betty Sipe, Todd and Barb Sipe, Kathy and Jim Lesnar; four godchildren; fifteen nieces and nephews; many dear friends, coworkers, students; and the countless strangers given the opportunity for improved life through his final gift of organ and tissue donation.
In lieu of flowers, the family is requesting donations to the 'Run with Randy' fund established at Bremer Bank for the benefit of the Breckenridge Education Foundation.
To order memorial trees or send flowers to the family in memory of Randy Berndt, please visit our flower store.