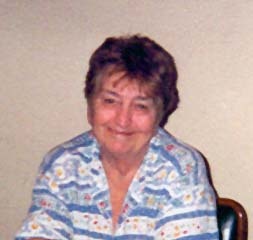 Renee Ann Burhans, 76 of Breckenridge, MN passed away in her home on November 13, 2010 surrounded by her family. The funeral is Thursday, November 18, 2010 at 7:00 pm. at Joseph Vertin & Sons Funeral Home, Breckenridge, MN. Officiating is Pastor Peter Erickson. The visitation is 2 hours prior to the funeral on Thursday from 5:00 to 7:00 pm.
Renee was born in Breckenridge, MN on August 19, 1934 to Leo and Alice (Burington) Braun. She grew up in Breckenridge, attending St. Mary's through the 8th grade then on to Breckenridge High School. Renee married Kenneth Burhans on November 12, 1951 at St. Mary's Catholic Church. They made their home in Breckenridge until 1963 when they and their 4 children packed up and moved out to California and that became their home for 26 years. Four more children were born and raised there. In 1989 they moved back to Breckenridge where they spent their retirement years. Kenneth preceded Renee on 12-9-1991.
In her spare time, Renee enjoyed crossword puzzles and crafting with her grandchildren. She treasured her time with her family. She will be remembered for her hospitality and her fridge was always open for those who came to visit. Renee will be sadly missed by all those who knew her.
Renee is survived by her sons, Randy (Donna) Burhans of San Dimas, CA; Rick (Cindy DeFries) Burhans of Breckenridge, MN; Bobby Burhans of Wahpeton, ND; Thomas Burhans of Breckenridge, MN; Patrick (Wendy Johnson) Burhans of Dwight, ND; her daughters, Sandy (Jon) Brogren of Wahpeton, ND and Barbara Vanderbend, of Banning CA. Her 13 grandchildren, Brock (Kim) Lorenzetti, Jason (Val) Vanderbend, Geddy (Christine) Hicks, Kellie Vanderbend, Erika Vanderbend, Vinnie Paxton, Jeffery Stevens, Breanna Paxton, Justin Stevens, Daryn Burhans, Amy Stevens, Rene Burhans, Kaiden Roberts. Her 12 great-grandchildren, Jakob Lorenzetti, Anthony Lorenzetti, Gino Vanderbend, Marissa Lorenzetti, Jacob Hicks, Alex Hicks, Jayden Stevens, Ashley Hicks, Payton Harris, Harley Vanderbend, Jayden Toro, and Raiden Stevens. Her brother Jack (Kathy) Braun of Wyndmere, ND; her sisters Frances "Pat" (Larry) Horak, of Phoenix, AZ; Sheila (Richard) Ludwig of EdenValley, MN and Sharon (Ralph) Brinkman of Avon, MN.
Renee is preceded by her husband Kenneth; her daughter Kimberly Burhans (2006); her granddaughter Valerie Vanderbend; her parents, Leo and Alice Braun and her brothers, Leo and Bernard
To order memorial trees or send flowers to the family in memory of Renee Burhans, please visit our flower store.