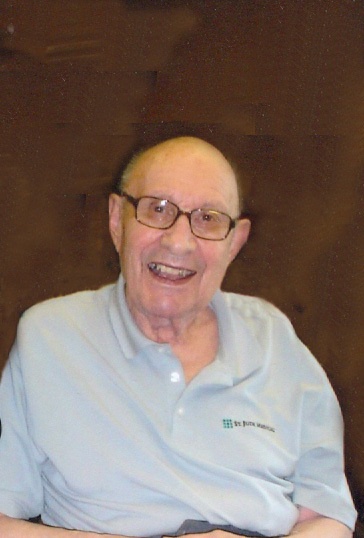 A lifetime resident of Breckenridge, Richard Leo Miksche, born July 4, 1923, hails from one of the area's pioneer business families. His grandfather, Frank Miksche, established the Wilkin Hotel and Bar in the community shortly before the 20th century and was a well-respected entrepreneur.

Richard's parents were Anthony Miksche and the former Clara Braun. His mother's family had its roots in Wahpeton where they founded a large grain and flour milling company.

A 1941 graduate of Breckenridge High School, where he played football and was a member of the Minnesota State Basketball Champion Breckenridge Cowboys, Richard entered St. John's University at Collegeville, Minnesota, and later attended the Wahpeton State School of Science, now known as the North Dakota State College of Science.

World War II interrupted his collegiate years. He joined the United States Navy in 1944 and served in the Seabees until his discharge in 1946.

Returning to Breckenridge, he joined his father, his uncle Leo Miksche, and two brothers, Anthony (Tony Jr.) and Robert in the hotel, restaurant and liquor operations at the Wilkin, which at the time, primarily served the employees of the thriving railroad industry in the community. The family also had extensive real estate holdings in the main business corridor of Breckenridge.

Richard remained with the family business for 46 years. In that time, he witnessed some tremendous changes, when in the 1970's the Burlington Northern Railroad virtually abandoned the city.

After his father's death, the three sons remained in partnership. However, economics dictated that the hotel and restaurant be closed and much of the other real estate sold. His brother Robert eventually left the enterprise, and then Richard and his oldest brother Anthony concentrated their energies on their remaining property, the Wilkin Bar. At a later time Richard became sole owner of that business. When he retired he sold it to his son Robert.

Active in Breckenridge community affairs, Richard was a past member of the city council. He also belonged to the American Legion and the Elks Lodge, and was a member at St. Mary's Catholic Church where he was an usher. In his younger days, Richard enjoyed stamp collecting, his annual hunting trip with his sons, and watching and trading the stock market. He was a hard worker and proud of his Breckenridge heritage.

He was preceded in death by his parents, Anthony and Clara; his infant son, Stephen Miksche; his sisters, Gertrude and Catherine; and his brothers, Anthony and Robert.
To order memorial trees or send flowers to the family in memory of Richard Miksche, please visit our flower store.