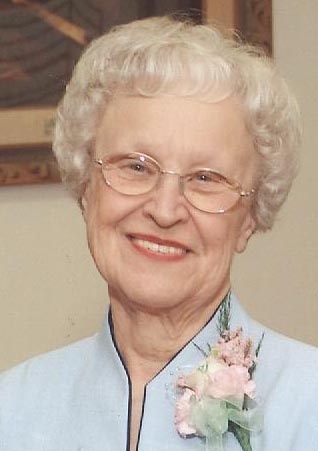 Rita Delores Lehman, 78, Rural Tintah, MN, passed away on August 8, 2014, at St. Francis Health Care Campus surrounded by her family. There will be a visitation Tuesday, August 12 from 5:00 to 8:00 PM, with Rosary at 6:45 and prayer service at 7:00, at St. Gall's Catholic Church in Tintah. The visitation will continue at 10:00 AM on Wednesday, August 13, followed by the Mass of Christian Burial at 11:00 AM, at the Church. Father Mike Kellogg will be the celebrant.
Rita was born on December 5, 1935 to Joseph and Agnes (Koziol) Keller in rural Tintah. She grew up and attended school at Tintah, graduating high school in 1954. She married Bernard Francis Lehman on November 15, 1955, at St. Gall's Catholic Church. Together, they made their home and raised their three children on the family farm. She was a wonderful cook and took charge of feeding the farm workers rib-sticking meals, spring through fall. The aromas of Rita's homemade chocolate chip cookies, caramel rolls and buns filled the Lehman home and welcomed friends and family. She also reaped the benefits of a large vegetable garden by canning pickles, sauerkraut, tomato soup, and jelly. Perhaps the most unusual, albeit tasty, canned good Rita was known for was her cheez-whiz and tartar sauce.
Many wonderful memories were made during the family's yearly summer vacations on Ten Mile Lake. Rita and Bernard retired from farming in 1983 but never resigned from the life they built together. They loved it on the farm. Even after Bernard passed away on June 6, 2007, Rita remained on the family farm until her passing. Her Catholic faith was very important to her as was serving with her church family. She was active in St. Gall's church serving in Ladies Aide for many years and as a Sacristan since 2004.
Rita left behind an adoring family, her daughters, Mary Jo (Bob) Roggeman of Breckenridge, MN, and Karol (Alan) Munson of Fargo, ND; her daughter-in-law Peggy (Mike) Corey of rural Herman, MN; her grandchildren, Bernie (Kristin), Bobbi Jo (Dan), Nick (Laura), Heidi (Greg), Tanner (Kadie), Jessica (Mike), Madeline, Ryan, Tonya (Shawn), Eric (Leslie), and Lexie; her great-grandchildren, Hayden, Courtney, Bryce, Hunter, Zander, Brielle, Mya, Wyatt, Cole, Devin, and Jillian; her sisters, Irene Helsene of Perham, MN, Tillie Aune of Breckenridge, MN, Eleanor Olson of Wendell, MN, Mary (Ralph) Carlson of Elbow Lake, MN, Audrey (Clayton) Johnson of Tintah, MN, Grace Georgen of Ortonville, MN, Regina (Vessey) Thomas of Rosholt, SD, and Jancie (Ed) Schillenger of Gwinner, ND; her brothers, Toby (Janice) Keller of River Falls, WI, Cyril Keller of Fergus Falls, MN, and Edward Keller of Perham, MN; and many nieces and nephews.
Rita was preceded in death by her parents, Joseph and Agnes; her husband, Bernard; her son, Donald "Donnie" Lehman; her siblings, Dorothy Michels and Louis Keller.
To order memorial trees or send flowers to the family in memory of Rita Lehman, please visit our flower store.