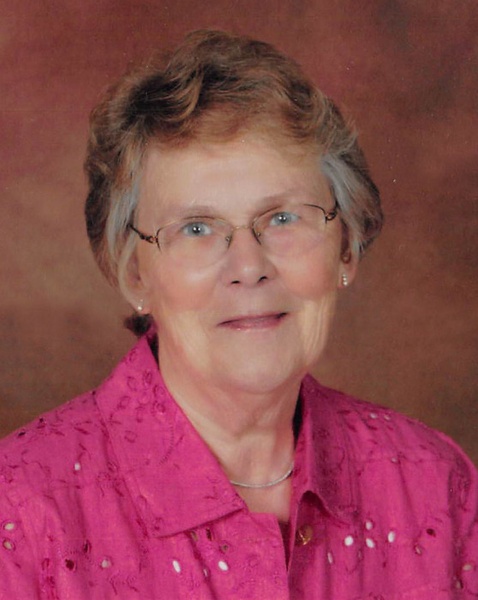 Rita Joanne (Nordick) Yaggie, 82, of Breckenridge, MN passed away on Monday, May 14, 2018 at Twin Town Villa in Breckenridge surrounded by her family after a three-year battle with lung cancer. A rosary will be held on Thursday, May 17, 2018 at 4:30 p.m., followed by visitation from 5:00 p.m. to 7:00 p.m. with a prayer service at 7:00 p.m. at Joseph Vertin & Sons Funeral Home in Breckenridge. Visitation will resume on Friday, May 18, 2018 from 9:30 a.m. to 10:30 a.m. at St. John’s Catholic Church in Wahpeton, ND, followed immediately by the funeral mass at 10:30 a.m. A burial service will be held at St. Thomas Catholic Cemetery in Kent, MN.  Arrangements are entrusted to Joseph Vertin and Sons Funeral Home.

Rita was born in Breckenridge, MN on May 23, 1935 to John and Martha (DeBover) Nordick. She grew up in the Kent, MN area and attended high school at St. Francis Academy in Hankinson, ND.

She was united in marriage to Donald Yaggie in 1955 and lived most of her life on their farm east of Breckenridge where she enjoyed being a devoted mother to her children. In 1997, Rita moved to Ottertail Lake, MN where she worked as a prep cook at Betty’s Pantry and was active in Saint Lawrence Church. She resided at the lake for twenty years before returning to the Breckenridge/Wahpeton area.

Rita was a member of St. Mary’s Catholic Church in Breckenridge. There, she loved being involved with the St. Agnes Mission Circle. She delivered Meals on Wheels, volunteered at the St. Francis Hospital gift shop, and was always busy attending her grandchildren’s activities. She enjoyed being with her friends and was so grateful for each and every one of them. Her life’s greatest joy and accomplishment was raising her eight children, whom she loved uniquely and immeasurably; in return, her children and grandchildren adored her!

Rita was preceded in death by her parents; her brother, Donald; and her sister, Sister Thomasine.

In lieu of flowers, the family requests that you take your family or loved ones out for dinner to make a memory and enjoy precious time together.

To order memorial trees or send flowers to the family in memory of Rita Yaggie, please visit our flower store.