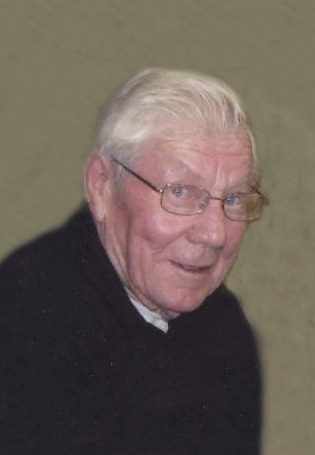 Robert William Hansen, 85 of Campbell, MN died Sunday, November 3, 2013 at his home. The funeral will be 10:30AM, Thursday, November 7, at St. Paul's Lutheran Church in Campbell. Pastor Carl Berner will be officiating. The visitation will be at Joseph Vertin & Sons Funeral Home in Breckenridge, MN, Wednesday, November 6, from 5:00 to 8:00PM with a prayer service at 7:00. The interment will be at Riverside Cemetery in Campbell.
Robert "Bob" Hansen was born at Campbell, MN, May 3, 1928 to John and Frieda (Degner) Hansen. He was baptized and confirmed at St. Paul's Lutheran Church. He attended country school through the eighth grade. He graduated from Campbell High School in 1946. He then attended NDSSS for 2 years in their Electrical program. On March 27, 1951, Bob entered the United States Army. He proudly served his country in active duty until March 3, 1953 reaching the rank of Corporal. He was then transferred to the US Army Reserve for five years. He received an honorable discharge and returned home to the family farm where he eventually took over the agriculture reigns from his dad. On October 22, 1958, Bob was united in marriage to Dolores Jean Stortroen at Webster, SD. To this union, their daughter Debra and son Michael were born.
Other than farming which he so dearly loved, Bob would do electrical and carpentry work during the long Minnesota winters. He also worked at Minn-Dak Farmers Co-op for 15 years. He enjoyed gardening and playing cards and was an avid hunter and fisherman; but most of all he treasured the company of his family and friends.
Bob is survived by his daughter, Debra (David) Stransky of Parker, CO and their son Matthew; and his son Michael (Jane) Hansen of Doran, MN and their children Megan, Adam, and Andrew; his brothers Don (Bernice) Hansen of Breckenridge, MN, and David (Lorna) Hansen of Veblen, SD; his sister-in-law Florence Hansen of Doran, MN; brother-in-law Robert (Shirley) Stortroen of White Bear Lake, MN.
Bob is preceded in death by his parents John and Frieda; his wife Dolores (1995); his brothers Henry and Orville; and his sister Marian Unger.
To order memorial trees or send flowers to the family in memory of Robert Hansen, please visit our flower store.