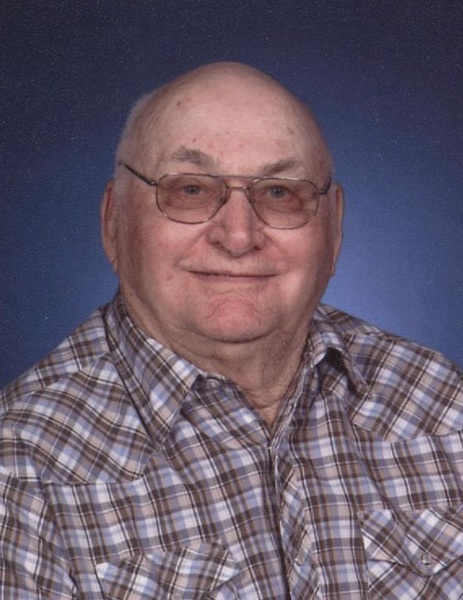 Robert Joseph Schillinger, 87, of Breckenridge, MN, passed away suddenly at his home on Monday, October 19, 2015. The visitation will be Thursday, October 22, from 5:00 to 8:00p.m. with a prayer service at 7:00 p.m. at Joseph Vertin & Sons Funeral Home, Breckenridge, MN. Visitation will continue on Friday, October 23, at Grace Lutheran Church in Breckenridge from 12:00 p.m. to 1:00 p.m. The funeral service will begin at 1:00 p.m. at Grace Lutheran Church followed by lunch and then burial at Riverside Cemetery, Campbell, MN.
Robert "Bob" Schillinger was born August 2, 1928, one of five children born to Joseph and Anna (Nennig) Schillinger on the family farm near Breckenridge. He attended country school, the Doran School and the Campbell School and worked on his family's farm until entering the U. S. Army on March 27, 1951. He proudly served our country in the Korean War where he received the Korean Service Medal with the Bronze Star – a United Nations Service Star. He was honorably discharged on March 24, 1953. Upon his return home, he worked on the Clarence Lacey farm near Campbell.
Robert was united in marriage to Louise Evelyn Murray on November 22, 1953 at St. Paul's Lutheran Church in Campbell, MN. They made their home in Campbell for a short time before moving to Wahpeton, ND, where Bob worked for I. E. Lillegard on their farms. In 1956, Bob and Louise purchased a farmstead north of Campbell, MN. Bob worked at the elevator in Campbell, the Campbell Oil Company, and on the Schendel Farm for 12 years. In 1969, the couple purchased the Murray farm east of Campbell and began a renovation process that took more than four years to complete. It became a home full of fond memories as they raised their nine children and farmed for the next 38 years. Bob and Louise then purchased their home in Breckenridge where they have since resided.
Since his retirement from farming in 1990, Bob enjoyed seasonal work on the Jirak farm. He never lost his enthusiasm for John Deere tractors, antique tractors and farming. Each year, he looked forward to entering his tractors in the Antique Tractor Parade at the Wilkin County Fair where he earned many trophies. He loved reading Louie L 'Amour western novels, watching western movies - especially John Wayne, laughing along with the Three Stooges, and having coffee and conversation with friends. He was an active member of Grace Lutheran Church, and a former member of St. Paul's Lutheran Church in Campbell. He was a proud member of the Fergus Falls VFW Post 612 and the American Legion Club Post 53 in Breckenridge. For the last 25 years, Bob wrote his thoughts and daily activities in a journal, which is now a beloved piece of family history. Bob especially loved his family and was extremely proud of his wife, Louise, their 61 years of marriage and each one of his 9 children, 15 grandchildren, 9 great-grandchildren, 3 step-grandchildren and 10 step great-grandchildren.
Bob is survived by his wife, Louise, of Breckenridge, MN; his nine children, Daniel (Kathy) Schillinger of Breckenridge, Susan Schillinger of Fridley, MN, Terry (Linda) Schillinger of Wahpeton, ND, Rhonda (Chuck) Miranowski of Breckenridge, Jean (Lowell )Bradbury of Vergas, MN, Corinne (Butch) Jirak of Breckenridge, Randy Schillinger of Wahpeton, Dennis (Anna May) Schillinger of San Diego, CA, and Tina Schillinger of Breckenridge; his brother, Lawrence, of Campbell, MN; his two sisters, Genevieve Zoucha of Tintah, MN, and Bernice (Raymond) Barth of Thief River Falls, MN; and many nieces and nephews.
Bob is preceded in death by his parents, Joseph and Anna, and his brother, David.
To order memorial trees or send flowers to the family in memory of Robert Schillinger, please visit our flower store.