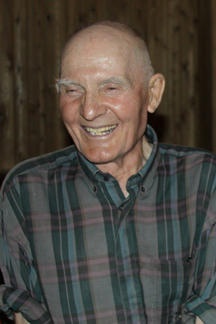 Bob, son of John and Clara (Faulkner) Sittarich, was born in Breckenridge on July 22, 1935 and was raised and continued to live on the family farm until his death. He attended St. Mary's Catholic and public schools through the 9th grade. He took over the family dairy business after his father's death in 1954. He retired from dairy farming in 1993.
Bob loved to hunt, fish and garden, and was well known for sharing his fresh garden produce. He enjoyed visiting with others and was a good storyteller with a remarkable memory and a contagious laugh. He was a life- time member of St. Mary's Catholic Church.
Bob is survived by his brothers and sister, Jack (Josie) Sittarich of Fairmount, ND, Marlene Sittarich of Duluth, MN, Roman Sittarich of Rock Springs, WY; his sister-in-law Pat Sittarich of DePere, WI; several nieces and nephews; and special friends Paula Kuruc and George Vertin.
He was preceded in death by his parents, John and Clara Sittarich; his brothers Anthony, Clifford, and twin brother (in infancy); his sisters Kathryn and Madelyn (in infancy).
To order memorial trees or send flowers to the family in memory of Robert Sittarich, please visit our flower store.