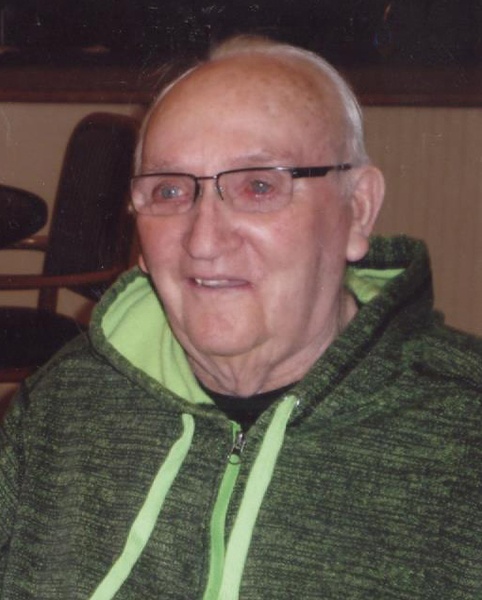 Robert "Bob" Toelle, 86 of Fergus Falls, MN, formerly of Breckenridge, MN, died Tuesday, April 2, 2014, at the MN Veteran's Home in Fergus Falls. The visitation will be Friday, April 4, from 5:00 to 8:00PM with a prayer service at 7:00PM, at Joseph Vertin & Sons Funeral Home in Breckenridge. Visitation will continue on Saturday, April 5 at 10:30, followed by the funeral at 11:30 AM at Grace Lutheran Church in Breckenridge. Pastor Anthony Ahrendt will be officiating. There will be a warm lunch served immediately after the funeral, followed by the interment at Riverside Cemetery in Campbell, MN.
Bob was born on May 26, 1927, on the family farm near Nashua, MN, the oldest of three children to Christopher "George" and Minnie (Bremer) Toelle. He attended Elliott School near Nashua and finished his formal education at the Campbell High School. He then enlisted in the United States Navy. During his tour of duty, he was on an aircraft carrier heading to Pearl Harbor when the attack occurred. Bob was honorably discharged on August 30, 1946, and returned home to Wilkin County. On Sept 29, 1950, he married his childhood sweetheart, Pearl Maurer, in Tyler, ND. They farmed until 1959 when they moved to Breckenridge. He was a "grease monkey" at Sturdevant's Auto Parts in Wahpeton, ND. Then in 1966, Bob accepted a position in road maintenance for the Wilkin County Highway Department. He retired in 1992. Bob and Pearl enjoyed their post-employment years at their cabin on Dead Lake near Dent, MN. Pearl passed away on January 12, 2008. Bob moved into the MN Veterans Home in Fergus Falls until his passing.
Bob's favorite pass time was fishing. He also liked to keep the county gravel pits stocked with Northern Pike. Taking time with family and friends was significant to him and he especially treasured the time with his grandchildren. He was a dedicated church member. Bob enjoyed the simple things in life…ice cream, corn on the cob, and Little Debbie's snacks with family and friends. In view of this and the fact that Bob was most comfortable in blue jeans, the family asks that his funeral be a "blue jean" occasion. Dress casually in Bob's honor. Also, in lieu of flowers, memorials are preferred to Gideons International (Bible Society).
Bob is survived by his daughter Karie (Jerry) Trupka of Breckenridge, MN; his 6 grandchildren Michael (Tamey) Schwartz, Patricia Collins, Deborah Collins, Brandon Trupka, Cynthia Trupka, and Emily Trupka; his 8 great-grandchildren, Sabrina, Logan, and Garrett Schwartz, Paige, Triton, and Talon Monson, Payton Collins, and Aurora Ruff; his brother, Keith (Valerie) Toelle of Plymouth, MN; and his sister, Shirley Maurer of Mission TX; and several nieces and nephews.
Bob is preceded in death by his parents, George and Minnie; his wife, Pearl; and his daughter Phyllis.
To order memorial trees or send flowers to the family in memory of Robert Toelle, please visit our flower store.