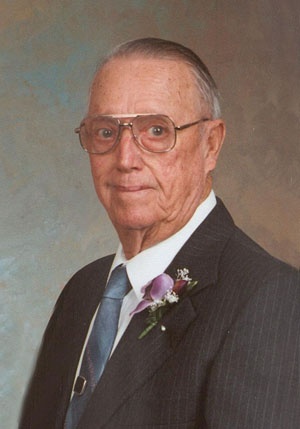 Ronald E. Barth 96, of Battle Lake, MN formerly of rural Campbell, MN, died June 20, 2012 at the Broen Home in Fergus Falls. The visitation is at Joseph Vertin & Sons Funeral Home, Breckenridge, MN on Sunday, June 24 from 5-7 with a prayer service at 7. The funeral is at Doran Presbyterian Church, Doran, MN on Monday, June 25 at 2:00 pm. Pastor Wendel Kelm is officiating. The interment is at Riverside Cemetery in Campbell.

Ron is the third child of eight, born to Henry and Sophie (Barth) Barth in Campbell Township on October 15, 1915. He grew up and attended country school in Campbell Township through the eighth grade. He worked on the family farm until joining the army on his birthday in 1941. While still serving in the military, Ron was united in marriage to the love of his life, Joyce Garrett, on December 4, 1943 in the Doran Presbyterian Church. He served as an artillery gunner in the 76th Field Artillery Battalion. For eighteen months he was fighting alongside his brothers in arms in the European Theatre including the Battle of the Bulge. He earned four Battle Stars, the Bronze Star, and several commendations. Ron was discharged on November 16, 1945.
Upon his return from military service, Ron moved back to the Campbell area and began farming. He purchased his own farm in 1956. Side by side he and Joyce worked the land and raised their children. They were members of the Doran Presbyterian Church. They retired in 1979 and moved to Clitherall Lake. In 1993 they sold their lake home and moved to Battle Lake. Joyce preceded him in death in 2007.
Ron loved the outdoors. He spent a significant amount of time hunting, fishing and tending to his vegetable garden. He also enjoyed a good game of cribbage and pinochle, going to auction sales and spent hours reading Louis Lamoure western novels. He treasured his time with his grandchildren and great-grandchildren and family lunches together. Ron will be remembered as a generous man to his family, neighbors and friends. He was hard-working, had a great sense of humor and was the rock of his family.
Ron is survived by his children Dorothy (John) Peterson of Portland, OR; Doug (Gloria) Barth of Thief River Falls, MN; Ronald (Kathleen) Barth of Clitherall, MN; Grant (Deborah) Barth of Campbell, MN; Laura (Shannon) Burau of Columbus, ND; Randy (Patti) Barth of Thief River Falls, MN and Kathy Barth of Battle Lake, MN; his 18 grandchildren and 32 great-grandchildren; his brother Raymond (Bernice) Barth of Thief River Falls, MN; his sisters Mildred Tessmer of Campbell, MN and Donna Jean Langenwalter of Milwaukee, WI.
Ron is preceded in death by his wife Joyce; his brothers Russell and Lyle (in infancy); his sisters Roena Giddings and Gertrude Clark; and his parents Henry and Sophie.
To order memorial trees or send flowers to the family in memory of Ronald Barth, please visit our flower store.