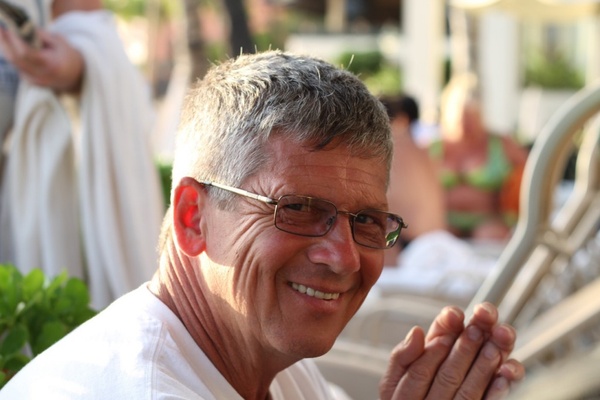 Russell Douglas Snyder, 67, peacefully passed away in his home at Ottertail Lake, on Sunday, July 16, 2017, surrounded by his family after a strong and courageous battle with cancer. The visitation will be from 5:00 to 7:00 PM, with a prayer service at 7:00, on Sunday, July 23, at Joseph Vertin and Sons Funeral Home in Breckenridge, MN. The visitation will continue at the funeral home on Monday, July 24, from 9:30 to 10:15 AM, followed by the Mass of Christian Burial at 10:30 AM, at St. Mary’s Catholic Church in Breckenridge. The interment will be at St. Mary’s Catholic Cemetery in Breckenridge.
Russ was born on October 18, 1949, in Breckenridge, MN, one of seven children born to Ella and Glen Snyder. He graduated from Breckenridge High School in 1967. He then attended Alexandria Technical School where he completed the Tool and Die Making program. Russ finished his career at Minn-Dak Farmer’s Cooperative in 2012, when he retired after 30 years of service. Russ married Linda Conzemius on November 23, 1968, in Breckenridge, where they lived and raised their four children. Upon their retirement, Russ and Linda moved to Ottertail Lake, where he lived out his passion for the great outdoors. During the summer he spent many hours trying to find the elusive “Walter” the walleye. In addition to his love for fishing, Russ was an avid hunter. Many memorable hunting traditions, including making their tasty deer sausage, were a highlight of their fall hunting season. He made out-of-this-world caramel rolls and buns, a variety of wines, and canned an array of his garden produce; but the best part of it all was sharing it. Russ was a natural at hospitality and looked forward to entertaining friends and hanging out with his family. Above all else, his greatest enjoyment came from spending time and creating special memories, with his ten grandchildren.
Russ will be missed by his wife, Linda; his daughters, LaRae (Tim) McCulloch of Menomonie, WI, and their children Adam and Amanda; his son, Jeff (Melissa) Snyder of Breckenridge, MN and their children Ashlynn, Gavin, and Tessa; his daughter Sheri (Mike) Platter of Menomonie, WI, and their children, Mason, Jaxson, and Jazzmin; his daughter, Michelle (Ryan) Weber of Fargo, ND, and their children Ty and Teagan; his two brothers and four sisters, Bev Albrecht of Raymond, MN, Rick (Becky) Snyder, Vickie (Marlin) Wentz, Brad Snyder, Lori (Scott) Lipp all of Breckenridge, and Deb (Jay) Mathiason of Big Lake, MN; and many nieces and nephews. Russ is preceded in death by his parents, Glen and Ella Snyder; his brother-in-law, Ed Albrecht, and his sister-in-law, Susan Snyder.
The family wishes to send a special thank you to Dr. John Tate and his amazing staff at Lake Region Health Care Cancer Center for the wonderful care Russ received during his courageous battle with cancer. Also, a special thank you to the staff at LB Hospice for their knowledge, patience, and understanding, as Russ finished his journey here on earth.
To order memorial trees or send flowers to the family in memory of Russell Snyder, please visit our flower store.