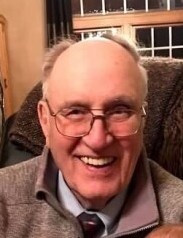 Russ Kastelle, 88, of Breckenridge, MN, passed away in his home Wednesday, July 14, 2021. Visitation will be held from 9:30 AM to 11 AM at Breck Lutheran Church on Monday, July 19, 2021, with his Funeral Service, led by Rene Hasbargen starting at 11 AM. Burial will follow after lunch at Aastad Cemetery. A live stream of the service will be available on the Funeral Home’s website. Arrangements have been entrusted to Joseph Vertin and Sons Funeral Home.

With the continued concern surrounding COVID, the family asks all that are unvaccinated and in attendance, to wear their masks. Masks and hand sanitizer will be available at the church for those who need one. Thank you for your cooperation and for keeping this gathering safe and comfortable for all.

Russell Ervin Kastelle was born to George and Edna (Baumgarten) Kastelle in the middle of a blizzard on the family farm 10 miles south of Fergus Falls, MN. His father’s cousin, Anna Gustafson Bergerud, was the midwife.

He completed grades one through eight at a one-room country schoolhouse and went on to Fergus Falls High school, graduating in 1951. Russ was active in high school sports. His team won the first Min-Kota Conference football Championship.

As teenagers, Russ and his brothers Harold and Jim worked on their dad’s and uncle’s farms and did custom grain shocking in two counties. The Aastad community was very closely knit, with all the neighbors gathering regularly for volleyball and softball games. After High School, Russ continued farming with his father and did some fur trapping.

In 1953 he was drafted into the army where he received his first training in land surveying. While at Ft. Campbell, KY, Russ was selected to receive airborne training. During his third jump, he caught a fellow parachutist whose parachute had failed and held onto him until they hit the ground. Although he didn’t complain about it, that hard landing led to lifelong back problems.

After the army, Russ enrolled at North Dakota State School of Science in Wahpeton, ND, where he polished his surveying and engineering skills. Working for K. B. Mackichan (KBM) and Associates, he was a surveyor for the original construction of the Air Force bases at Grand Forks and Minot, ND. Russ surveyed the original cross-sections of the Missouri River valley prior to the construction of Oahe and Garrison Dams. In 1960 KBM sent Russ to the City of Breckenridge, MN, to handle city engineering. At Breckenridge, he served on the Airport Commission and was a member of the volunteer fire department for 31 years. In 1968, Russ began teaching at the North Dakota State School of Science where he also served for 31 years. In 1972, he started his own business, Kastelle Land Surveying, and remained self-employed until recently.

In 1971, Russ helped organize the North Dakota Society of Professional Land Surveyors (NDSPLS) and remained active until his death. In 1989, the North Dakota Society awarded him their first Surveying Excellence Award. The following year Russ received the United States Surveyor of the Year Award. He and LeRoy Kautz started the ND Land Surveyors Museum in Jamestown, ND. Russ started the “Trig Star” program, a national trigonometry competition for high school students. Surveyors across America conduct the programs at their local high schools and award trophies.

On June 8, 1963, Russ married Darlene Walstad Greenquist at Breckenridge Lutheran Church and became a stepdad to her two sons, Gregg and Eric. Russ and Darl were married for 48 years; she died on July 22, 2011.

Russ is survived by his sons, Gregg Greenquist of rural Mandan, ND; Eric (Celeste) Greenquist of rural Abercrombie, ND; his sister, Evie (Gary) Fox of Breckenridge, MN; his granddaughter, Josephine (Mike) Hiti of Blaine, MN; and great-grandsons, Jens and Brandon Hiti. He was fond of all the many nieces and nephews of the extended Kastelle, Walstad, and Greenquist families.

In lieu of flowers, please make a donation to the Hummingbird Foundation at CHI St. Francis.

The Hummingbird scholarship was made possible by the late Darlene Kastelle family. Darlene received nursing care from St. Francis and felt the care she received was exemplary. This scholarship gives St. Francis Nursing Assistance attending NDSCS earning their nursing degree, an opportunity to apply for this scholarship. St. Francis staff also contributes to this fund to help grow into an endowment fund. Darlene loved to watch the hummingbirds outside her window. Thus the term, Hummingbird Scholarship.

To order memorial trees or send flowers to the family in memory of Russell "Russ" Kastelle, please visit our flower store.