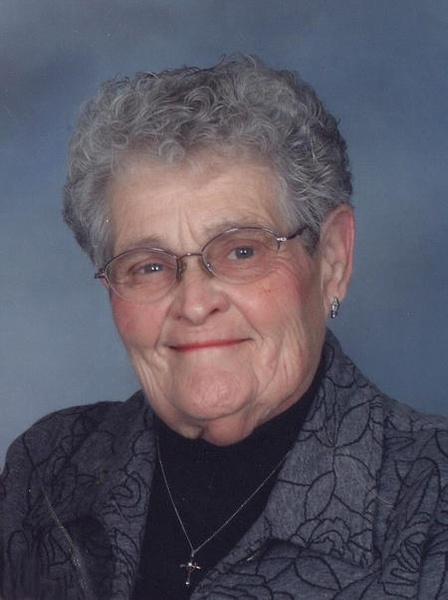 Ruth Clarice Bellmore, 75, of Breckenridge, MN, died at St. Francis Health Care Campus in Breckenridge on Tuesday, November 12, 2013. The visitation will be on Friday, November 15, from 4:00 to 7:00PM with a prayer service at 7:00PM, at Joseph Vertin & Sons Funeral Home in Breckenridge, MN. The Mass of Christian Burial will be at 10:30AM, Saturday, November 16, at St. Mary's Catholic Church in Breckenridge. Father Stan Wieser will be the celebrant. The interment will be at St. Thomas Cemetery in Kent, MN.
Ruth was born on October 12, 1938, the only child to Clarence and Evelyn (Willard) Grenier in Breckenridge, MN. She grew up and attended school in Breckenridge, graduating from High School in 1957. She then went on to earn a degree as an X-Ray Technician, at the St. Francis School of Nursing in Breckenridge, graduating in 1959. On November 29, 1962, Ruth, was united in marriage to Robert "Bob" Bellmore at St. Mary's Catholic in Breckenridge. To this union, Brice, Belinda, and Blaine, were born.
Ruth was a devoted caregiver to both of her parents for many years. She was a huge fan of the Breckenridge Cowboys/Cowgirls, even achieving a "Cowgirl Booster of the Year" award. In addition to her job as X-Ray technician, she coached Wolverton Girls Softball, was a 4-H leader, and drove school bus for many years.
In her spare time, Ruth liked to put her creative touches on stained glass and wood working projects. Ruth delighted in spending time with family and hosting holiday gatherings. One of her favorite places to travel was visiting relatives in Duluth, MN; but also looked forward to spending time at the family lake cabin on Crystal Lake. After retiring from her 20 year-long career as an X-Ray Technician, she dedicated much time to volunteering with Riveredge Hospice and St. Francis Home Health Care programs. She also worked part-time helping out at Creative Stitches in Breckenridge.
Ruth was a long time member of St. Thomas Catholic Church, St. Mary's Catholic Church, Christian Mothers, and the Catholic Order of Foresters. She spent the last 6 months at Twin Town Villa MC in Breckenridge.
Ruth is survived by her husband of 50 years, Bob; her children, Brice (Sara) Bellmore of Kent, MN, Blaine (Jen) Bellmore of Breckenridge, MN, and Belinda Bellmore of Hardin, MT; her grandchildren, Daniel (Stacie), Emma, Maegan, and Jaxon.
She is preceded in death by her parents, Clarence and Evelyn.
To order memorial trees or send flowers to the family in memory of Ruth Bellmore, please visit our flower store.