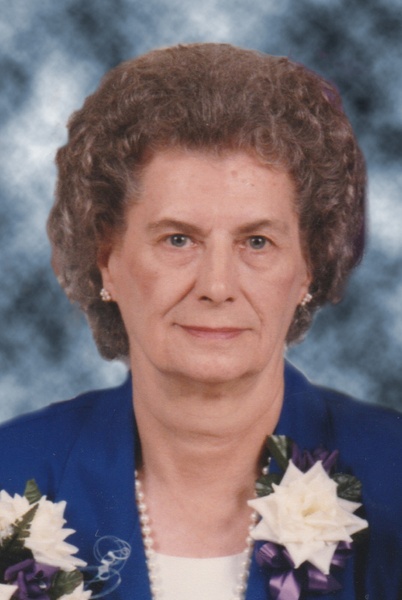 Ruth Esther Johnson was born in Campbell, MN, on September 19, 1921, the youngest daughter of Louis and Mollie (Severson) Johnson’s three children. She grew up in Campbell, attended grade school and continued living there her whole life. It was in Campbell that she met and fell in love with her best friend, Edwin Neuman, and they were united in marriage on August 31, 1941. Along with marriage, Ruth became a stepmother to LaVonne. Ruth and Edwin began their family in the same community that raised them and they had three more children.

Ruth had a heart for those around her; she spent much of her time caring for others. She took great care of her husband as he went through long bouts with illness and in her later years as she cared for her mother. She loved being active in her town and she worked at Village Market for many years and was ultimately there until they closed their doors. She then worked many more years for 3M, a manufacturing company in Wahpeton, ND. Ruth was persistent in all that she did and she brought that determination into her hobbies. Ruth was an avid bowler; she was on the bowling team in Breckenridge and went on to several tournaments throughout the years. She loved spending time with her family, it was almost effortless how Ruth was able to host family gatherings, making sure everyone was comfortable and always well fed.  Her spirit will live on forever in the hearts of those who loved her.

Ruth was preceded in death by her parents, Louis and Mollie (Severson) Johnson; her husband, Edwin Neuman; her infant daughter, Sharon Lee; her sons, James Neuman and Larry Neuman; her stepdaughter, Lavonne Flansburg; one sister, Orpha Kelly; and one brother, Cliff Johnson.

To order memorial trees or send flowers to the family in memory of Ruth Neuman, please visit our flower store.