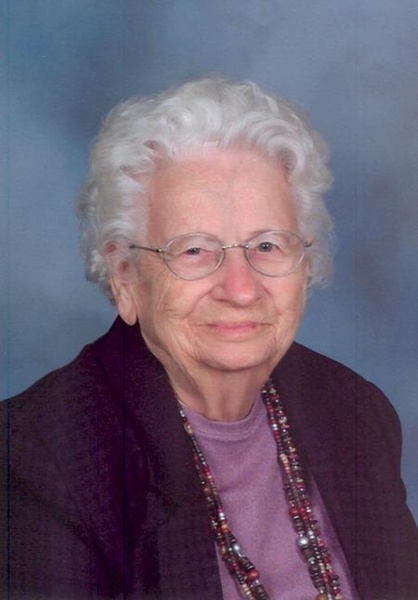 Ruth Giddings, 90 of Breckenridge, MN passed away on December 12, 2010 surrounded by family and under hospice care. The visitation is Thursday December 16, 2010 from 4-7 pm with a prayer service at 7 at Joseph Vertin & Sons Funeral Home, Breckenridge. The funeral is Friday December 17, 2010 at 10:30 am at St. Mary's Catholic Church, Breckenridge, MN with Father Kenneth Popp officiating. The interment is at St. Mary's Catholic Cemetery, Breckenridge.
Ruth Margaret McLellan Giddings, oldest daughter of Percy and Edith (Anderson) McLellan, was born on April 2, 1920 in Breckenridge, MN. She grew up and attended schools in Breckenridge-graduating from St. Mary's Catholic School in 1935 and Breckenridge Public School in 1939. After high school, Ruth chose nursing as a vocation and achieved an RN degree from St. Francis School of Nursing in Breckenridge graduating in 1942. She entered a post- graduate maternity program at the University of Chicago- and graduated on September 12, 1952. Ruth had the privilege of working as a nurse at two different hospitals during her career-Miller Hospital, Duluth, MN and St. Francis Hospital in Breckenridge.
Ruth was united in marriage to Raymond Giddings on September 22, 1952 in Breckenridge where they made their home and raised their six children. Ruth was a member of St. Mary's Catholic Church, Railroad Retirees, and Retired Nurses Association. In her spare time she enjoyed working puzzles and treasured family gatherings. She delighted in making holidays and other family get-togethers special and memorable. She cultivated enduring friendships over the years, most recently those at Twin Town Villa. She was gifted at making people feel special and cared about. Ruth cherished her family and attached great importance to spending time with them.
Ruth is survived by her daughter Nancy (Jim) Grotluschen of Kent, MN; her five sons Scott (Susan) Giddings of Woodway, TX; Mark (Diane) Giddings of Lake Park, MN; Spencer (Lorri) Giddings of Bismarck, ND; Brad (Karen) Giddings of Crookston, MN; Brian (Ardis) Giddings of Pella, IA; 14 grandchildren and 3 great-grandchildren. Ruth is preceded by her husband Raymond Giddings (1999); her baby sister Helen (1925) and her parents.
To order memorial trees or send flowers to the family in memory of Ruth Giddings, please visit our flower store.