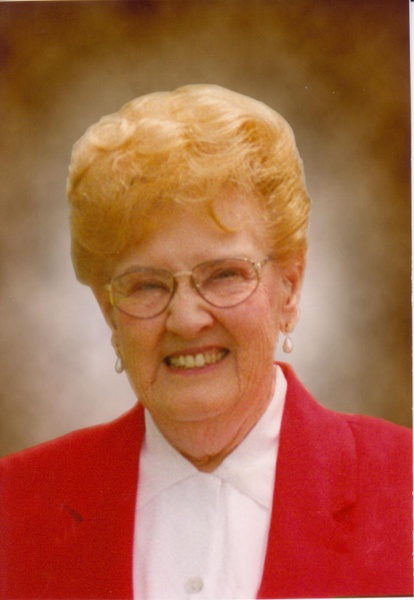 Ruth ‘Frances’ Weber, 94, Rochester, NY formerly of Campbell, MN passed away peacefully on September 3, 2010 at Park Ridge Living Center in Rochester, NY. The funeral is Saturday September 11, 2010 at 10:30 am. at St. Gall’s Catholic Church, Tintah, MN with Father Arlie Sowada officiating. The visitation is Friday September 10 from 7:00 to 9:00 pm. with a prayer service at 7:30 pm at Joseph Vertin & Sons Funeral Home and one hour prior to the funeral service at St. Gall’s Catholic Church. Interment is at Calvary Cemetery, Wahpeton, ND.

Ruth Frances Driscoll was born November 26, 1915, the daughter of James and Anne (Sullivan) Driscoll in East Grand Forks, MN. She attended Sacred Heart Catholic School, graduating in 1932. After one year of normal school, Frances taught in a one-room school house near Tabor. She then attended Moorhead State College, graduating in 1939. She taught at Campbell Public School and Melrose Public School prior to her marriage to Ira Weber in San Diego, CA, on August 26, 1943.

During World War II she worked at an airplane factory, riveting wings onto planes for the US Army Air Corps.   Babe and Frances returned to Campbell, MN, in 1945 and Babe took over the Weber Blacksmith Shop, later known as Weber Chevrolet and Repair. Frances returned to teaching in 1960 in a one-room school near Campbell. When the school consolidated with Campbell Public School, Frances began teaching third grade. She taught over 30 years, the last few years teaching under Title I Math and Reading. After retiring, Frances and Babe formed the Weber Duo, performing at family functions and nursing homes. Together they brought the joy of music to many people. She loved cooking and baking for her family.

Frances is preceded by her husband Ira ‘Babe’ in 1987; her daughter, Kathleen Weber-Seay in 2006; her grandson Jared Brunkhorst; her sisters, Lillian Bushaw, Alda Mongoven, Edna Harvey Louise Stowe, Mary King, and their spouses; her brothers: James, Charles, Leonard, John ‘Jack’, and their spouses.

In lieu of flowers, memorial donations may be made to St. Gall’s Church,