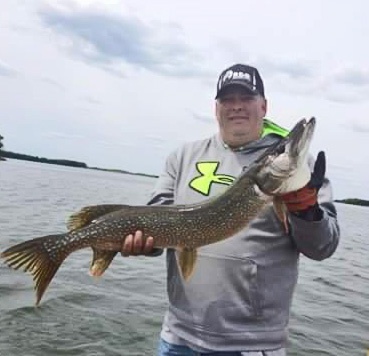 Scott "Scoot" Edward Giwoyna, 44, of Wahpeton, ND, passed away suddenly on Sunday, June 7, 2015, in Waubay, SD. The visitation will be from 5:00 to 7:00 PM, on Thursday, June 11, at St. John's Catholic Church in Wahpeton, ND, followed by the Memorial Service at 7:00 PM. Father Dale Lagodinski will be the Celebrant. There will be a light lunch following the memorial service.
Scott was born in Fargo, ND, on June 19, 1970, one of 3 sons born to Gerald "Butch" and Jeanne (Kosek) Giwoyna. He grew up on his grandfather's dairy farm near Wahpeton, ND and attended school in Wahpeton. Scott knew early on that farming would be his life's work, so following graduation he added custom combining to his resume. He then obtained work with local farmers and most recently, he was employed on J and K Grain Farms, near Mooreton, ND.
Even though he loved farming, there were many other things in Scott's life that defined him. He was an avid hunter and fisherman, and particularly looked forward to the outdoor excursions with his dad and brothers. He was an active member of Ducks Unlimited and Pheasants Forever, and loved to pal around with his dog, Dakota. His grandson, Treyton, stole his heart on the day he was born, and Scott was anxiously awaiting the birth of his second grandson, David.
Scott was also defined by his talents; he was mechanically inclined, so he was the go-to-guy for many friends and family when anything needed fixing. He was gifted at woodworking and liked putzing in his vegetable gardening. He enjoyed NASCAR, playing darts, and cooking on the grill for family and friends.
Scott is survived by his 3 children, Samantha (special friend Chris Pellman) Giwoyna of Wahpeton and her son, Treyton; Tristan Giwoyna of Wahpeton; and Courtney Giwoyna of Fairmount, ND, and her soon-to-be-born-son, David Scott Kuehl; his dad, Butch (Beverly) Giwoyna of Wahpeton, MN; his mother, Jeanne Devine of Breckenridge, MN; his 2 brothers, Jayme Giwoyna of Wahpeton, and his son, Jeric; and Corey Giwoyna of Breckenridge, MN, and his 2 daughters, Jada and Marlee; his special friend, Wendy Henning of Breckenridge; and several aunts, uncles, and cousins.
Scott is preceded in death by his maternal grandparents, James Kosek and Lorraine Mauer; his paternal grandparents, Ed and Mary Giwoyna; and his step-father, Virgil Devine; step-grandmother, Luella Kosek.
To order memorial trees or send flowers to the family in memory of Scott Giwoyna, please visit our flower store.