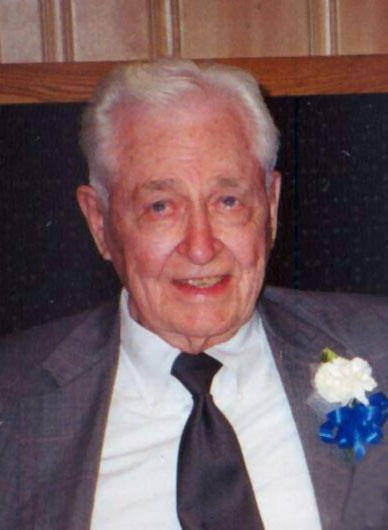 Shirley Joseph "Pug" Matheson, 97, of Breckenridge, MN died May 6, 2012 at his home. The visitation is at Joseph Vertin & Sons Funeral Home, Breckenridge on Wednesday, May 9 from 4:00 to 7:00pm with a prayer service at 7:00. The funeral is at Breckenridge Lutheran Church on Thursday, May 10 at 2:00 pm with a visitation one hour prior. Pastor Mark Manning is officiating. The interment is at Fairview Memorial Gardens in Wahpeton. There will be full military honors by the VFW Wilkin County Post #2766 and the Minnesota Military Funeral Honors Guard.

Shirley was born August 12, 1914 in Breckenridge, MN, the youngest of twelve children to John and Julia (Lambert) Matheson. He attended school in Breckenridge and Wahpeton, ND. As a young man he worked with his father in the well drilling business. On February 9, 1934, Shirley was united in marriage to Pauline Klein in Sisseton, SD. In August of 1942, he went to work for the Great Northern Railroad in the Roundhouse in Breckenridge as a Machinist Helper. Shirley entered the military service on March 29, 1944 at Fort Snelling. He took basic training in the Combat Engineers at Camp Abbot, Oregon and Fort Lewis, Washington. He was deployed with the 151st Medical Battalion in the China, Burma, India Theatre. He had a temporary assignment with Dr. Seagraves- a British Colonel- at Namcam Burma Hospital. His last assignment during WWII had been on Luzon Island in the Philippines. Upon his return from military service in 1946, he was reunited with his family in Breckenridge and once again began working for the Great Northern Railroad. In April of 1959, Shirley went to work for the United States Postal Service in Breckenridge and worked there until his retirement on November 30, 1990.

Shirley was meticulous about the landscaping at the Post Office and took great pride in how the lawn and flowers looked to the town of Breckenridge. He and Pauline enjoyed dancing together at the Pavilion and the Eagles. He was a devoted family man. His greatest joy was taking his children and grand children fishing. He was an avid MN Twins fan, a member of the Wahpeton Eagles Club and VFW in Breckenridge, MN.

Shirley is preceded in death by his wife Pauline (2001); his parents John and Julia Matheson; a grandson in infancy, Randy Hills; his brothers John, Harry, Charles, William, Robert, Alfred and Clyde; his sisters Hazel Larson, Josephine Van Buren, Theresa Martin, and Loretta Olson.
To order memorial trees or send flowers to the family in memory of Shirley Matheson, please visit our flower store.