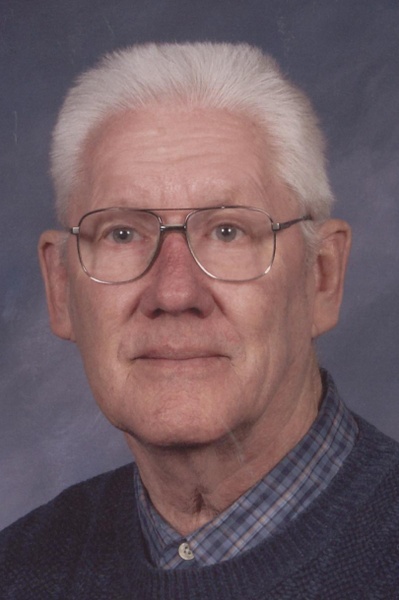 Stanley Theodore Strohschein, 84, of Breckenridge, MN, passed away Friday, April 25, 2014, at St. Francis Nursing Home in Breckenridge. The visitation will be from 10:00 to 11:00am, on Tuesday, April 29, at Trinity Lutheran Church in Great Bend, ND, followed by the funeral at 11:00am. Pastor Sean Daenzer will be officiating. The interment will be at Trinity Lutheran Cemetery in Great Bend.
Stanley was born on January 20, 1930, to Theodore and Filma Strohschein in Mankato, MN. As a young child, he lived in various places throughout North Dakota and Minnesota. He graduated from Owatonna High School, Owatonna, MN. Following high school, he proudly served his country in the US Army, stationed state-side during the Korean War. He was a member of the American Legion in Sauk Center, MN. He married the love of his life, Phyllis Gronholz, on June 6, 1953 at Owatonna, MN.
Stanley, along with his father, Theodore, and his brother, Arvid, owned and operated several businesses together, including a Ford Dealership in Blooming Prairie, MN and A & S Distributing in Sauk Centre, MN. He and Phyllis retired to Breckenridge to be closer to family. They had a great love of traveling, camping, hunting, fishing, and family. Phyllis passed away in January of 2000. For the last several years, Stanley had been battling Alzheimer's disease, and most recently resided at St. Francis Nursing Home.
Stanley is survived by his children, Candy (Brian) Ziegelman of Great Bend, ND, Kelly (Dale) Klemm of Milbank, SD; his grandchildren, Andy Ziegelman, Derek Klemm, Brandon (Jessica) Klemm, Casey (Shauna)Strohschein, and Emily Hankins; his daughter-in-law, Julie Strohschein of Killeen, TX; his sister-in-law, Janice Strohschein; and many nieces and nephews.
Stanley is preceded in death by his wife, Phyllis; his son, Kent; his parents, Theodore and Filma; his brother, Arvid.
To order memorial trees or send flowers to the family in memory of Stanley Strohschein, please visit our flower store.