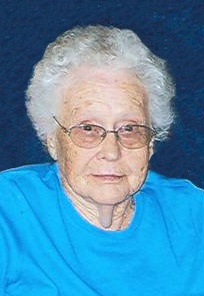 Visitation will be Sunday, June 28, from 4 to 7 p.m. with a prayer service at 7 p.m. at Joseph Vertin & Sons Funeral Home, . There will also be visitation one hour prior to the service at the church. Interment will be at , Breckenridge.

Stella was born on January 10, 1919 to Mads and Sarah ( ) Tosse in . She grew up on a farm in , south of Geneseo. Stella was baptized and confirmed at and graduated in 1937 from . After high school she helped out on the farm with her mother and brothers.

On August 12, 1939 Stella married William Anton Korinek in . They made their home on a farm six miles south of where they raised their six children and mentored many nieces and nephews. Stella helped organize and was a leader of the 4-H Club for many years. She was also a member of the Homemakers club and enjoyed crafts and fellowship with the neighbor ladies. She was an avid seamstress and spent many hours at her sewing machine, making many beautiful quilts. William preceded her in death on Jan. 17, 1967. She then began working outside the farm at various jobs, including working as a nurse’s aid at .

On July 6, 1974 Stella married Alfred Wessels. They lived in , until buying a farm south of . She enjoyed traveling around the country with him, and often spoke of their trucking adventures. He passed away in 1981.

Stella married Kenneth Hendriks on April 23, 1983 in . They lived in for two years until his retirement from the Air Force. The couple then moved to Breckenridge where they lived until Ken’s death in 1999. For many years Stella made her home at the York Manor in Breckenridge. She became a resident of St. Catherine’s in Wahpeton, ND in June of 2008.

Stella was an active member of and Ladies Aid. She loved flowers and enjoyed gardening, sewing, quilting, crocheting and embroidery as well as working puzzles and playing cards. In her younger years you would often find Stella working outside the house, as she enjoyed working around the farm with William. She loved to travel and enjoyed change. She was known to rearrange her furniture often and enjoyed moving into a new home.

To order memorial trees or send flowers to the family in memory of Stella Hendriks, please visit our flower store.