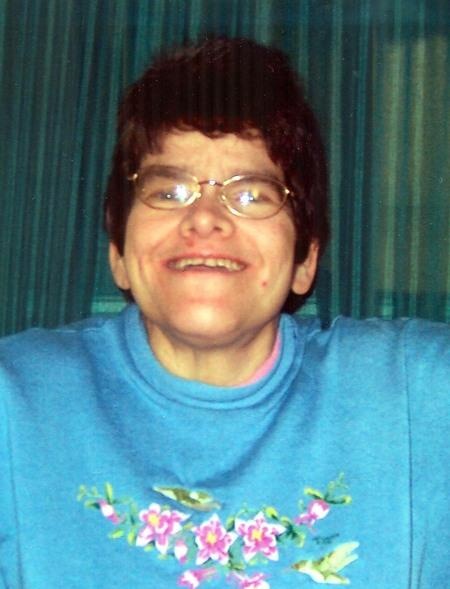 Susan Marie Dohman, 56 of Breckenridge, MN passed away at St. Francis Health Care Center on October 29, 2011. The visitation is Tuesday, November 1, 2011 from 4:30-8:00 with a prayer service at 7:00 pm at Joseph Vertin & Sons Funeral Home, Breckenridge, MN. There is also a visitation one hour prior to the funeral at the funeral home. The funeral is Wednesday, November 2 at 10:30am at St. Mary's Catholic Church, Breckenridge with Father Ken Popp officiating. Interment is at St. Mary's Cemetery, Breckenridge.
Susan Marie Dohman was born on June 20, 1955 in Breckenridge, MN to Clark and Delores Dohman. She grew up on the family farm in rural Breckenridge. In 1980, Susie moved to Breckenridge. She received vocational training and services through the Wilkin County DAC. Susie delivered the Perimeter, folded laundry at St. Catherine's Living Center, assembled bolt bags for WCCO and cleaned apartments. She loved participating in Group Home activities and enjoyed working with flowers, especially her time in the spring at Breck Floral. She treasured the companionship of her dog Roscow. Susie will be deeply missed by everyone who knew and loved her.
Susan is survived by her brother Larry (Kathy) Dohman of Breckenridge, MN; her nephew Brett Dohman; her nieces Michelle (Curt) Mathias, Shawn (Jim) Lund, Trista (Jeremy) Wiebusch, and Ali Dohman; her great nieces Jordan McLaren, Karlie and Reaghen Mathias, and Presley Wiebusch; several aunts and uncles and her extended family at West Central Community Services and the Wilkin County DAC.
Susan is preceded in death by her parents Clark and Delores Dohman; her brother Richard; her grandparents John and Anna Dozak and Harry and Annie Dohman; and her special friend Glen Smerud
To order memorial trees or send flowers to the family in memory of Susan Dohman, please visit our flower store.